If you haven’t seen Jon Shafer’s new project, At The Gates, check out its Kick Starter page. 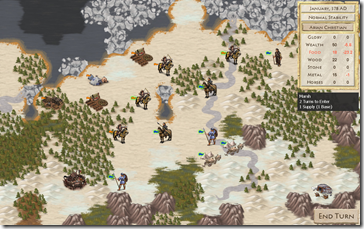 Here’s the basic concept:  The Roman Empire is failing. To those who have lived during the glory of Rome, it may seem like the end of the world. And they’re right – it is the end of their world but it is the beginning of our world.

To my knowledge, no game has tackled this very interesting time in western civilization.  You aren’t Rome. You’re a barbarian. Or more aptly, you are placed in the role of the overlord who will ultimately set mankind on the path that leads to the world we live in today. Of course, you’re not alone. Others see the fall of Rome as an opportunity to carve out their own empire.

For the purpose of full disclosure, Jon’s a friend of mine and has spent the last two years helping Stardock create a better game studio. For years, our company produced and published PC games but they were always in the shadow of our “real” business (PC software – things like Fences, WindowBlinds, Start8, ObjectDock, etc.). So the game studio at Stardock never evolved as a traditional game studio. That’s what Jon came in and helped do that.  Thanks to his help, we’ve delivered two solid hits in a row (Fallen Enchantress and Sins of a Solar Empire: Rebellion).

After Fallen Enchantress came out and was successful, Jon had the idea for a truly remarkable new game concept. At the same time, Jon was the leading voice here on a straight forward proposition: In the age of digital distribution and Kickstarter, can a guy and a few friends make a hit PC game independently?

I could list many reasons why it’s important that this game be successful. But I’ll only list the one reason it will be successful: It’s going to be an awesome game!

Jon still does consulting with us and Stardockians are helping out on the project in our off-hours.   But think of the ramifications for potential game developers everywhere: If this project is successful, it’ll mean that the market has evolved back to being able to support games that live (and die) purely on their game design and not whether they have a multi-million dollar budget.   This will be a huge win for gamers.

So go check it out. If you’re remotely into history, you will almost certainly like what you see.