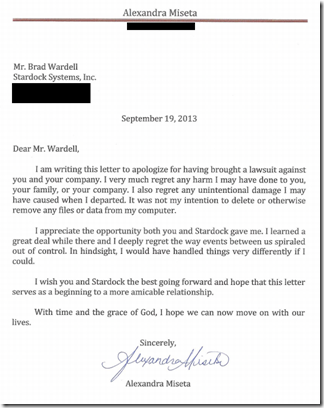 Not that I expect those people who are wholly invested in their hate to retract or express any regret for the death threats, smearing, or abuse they sent my way, but as any lawyer who is familiar with employment law can tell you, this is as clear of a victory as you can get.  I said at the time that we wouldn’t pay out a dime (except for lawyers obviously) and that only an apology letter would satisfy us.

Anyone who has ever run a business with lots of employees knows that sooner or later, you’re going to run into something like this. Every business has their own horror stories.

The sad thing is, our industry (the game industry) has legitimately serious problems. There really is a lot of misogyny in it. There is increasing awareness of it – which is good. But at the same time, there are too many opportunists ready to cash in on this issue. I know after what I went through I’ll never look at the issue the same again. I know many of my coworkers (male and female) feel the same. Is a story true or has it been exaggerated to get page views?

I know I’ll never have the same naïve views on business that I had in 2010 but I think I’m a better CEO as a result.

And in case there are still people out there wondering about the original allegations: They were either completely made up or they were taken so out of context as to completely change their meaning.