Ashes of the Singularity is a real-time strategy game we’re developing with an expected release date of 2016.  It goes into early access later this Summer.  It can best be described as Sins of a Solar Empire on a planet (or Total Annihilation meets Company of Heroes).  Your empire has thousands of individual units spread across a world in which you’re battling other players (single player or multiplayer) for control of its resources.  No game, RTS or otherwise, has ever had scope like this in terms of sheer numbers of units.  For that reason, a new type of specialized 3D engine had to be developed called Nitrous just for this purpose.

Ashes wallpaper for you.

With Windows 10 looming we are in the process of sending out Ashes code to game sites who want to benchmark DirectX 12 with the only native DirectX 12 PC game: Ashes of the Singularity.

IF you are in the media you are welcome to contact kristin@stardock.com to get a copy of the game.  The DirectX 12 benchmark will be going out this week we expect. 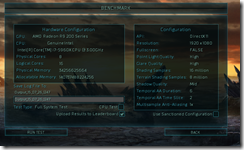 The Ashes benchmark on my puny Windows 8 box.

Ashes will give you a real preview of DirectX 11 vs. DirectX 12 in terms of real world performance.  What matters in particular is that Ashes is being optimized for both DirectX 11 and 12.  We need it to run extremely well on DirectX 11.  You can also compare it to Mantle which will give you a preview of how it will run on Vulkan in the future.

We’ve been working on the Ashes lore for the past several years.    I first started thinking about it in 2000 after having read The Age of Spiritual Machines.  Around that time I met with GT Interactive to license the Total Annihilation engine.  That didn’t happen and we moved on to other things.  The basic concept of the game, which back then was called “Mobilization” was about Post-Humans vs. Sentient AI.

That is, in essence, the background for Ashes.   Humans who have transcended the limits of biology versus sentient AI.  It is not a rise of the machines scenario.  It is more of a divergence in what the fate of the galaxy should be.

From a lore point of view, balancing science (which has a lot of dorky names) with good entertaining sci-fi has been more challenging that we thought.  For example, what do we call the Sentient AI? We want players to want to play as them. Giving these things good names matters. Same for the resources involved. There is a theoretical material called “Computronium” For those of you not interested in reading up on the limits of mixing n-type and p-type materials together, it boils down to the end point material in which we cannot possibly increase computing density.  We’re at 14nm right now with Skylake. There’s a limit to how tiny we can get. That theoretical limit is called computronium. aka, really dorky name.

This will be a bit hard for some people to understand but in this future, there are no nations. Every Post-Human, individually, is an empire. They have entire worlds at their disposals. They may form coalitions (in the same sense nations do) But every human in this future has more power in their hands than entire nations today do.

This shouldn’t come as a huge surprise if you think about it.  You already command thousands of robots today even though they’re all in software. You have many “horses” worth of power available to you right now.  The typical westerner lives better than the most powerful Kings and Queens of just a few centuries ago.  It’s not a stretch to imagine

But what should they be called?  In Sins of a Solar Empire, there is a coalition of humans called TEC (Trade Emergency Coalition) which is a set of corporations that have gotten together to help each other.  Post-Humans is basically a race.  They’re not on the same side.  In fact, there aren’t even coalitions yet.

We are leaning towards calling computronium Turinium after Alan Turing.

Turinium is what people are trying to convert planets into through nans.  In 2178, people aren’t living in the physical world anymore. Why bother? The physical world is interacted with through your constructs.  You could, if you really wanted I suppose, create a 2015 era biological human construct to go around and walk around and experience the physical world. It would suck.  2015 era humans couldn’t even see into the UV spectrum and couldn’t even fly.  So no one in 2178 would seriously consider doing that for very long.  Everyone lives within the Metaverse instead and each person’s capability is based on how much Turinium they control.

The first sentient AI shows up around 2030 and is known as Haalee.  By 2178, she and her descendants have evolved into their own race. Since they never were “real” humans, their views have become increasingly alien to the post-humans.  They are a lot less sentimental.  On the other hand, they have a larger view of things than the Post-Humans tend to do since they are much more cooperative with one another.

That said, we currently refer to them as “The Substrate” because the spaces they occupy in the physical world tend to get covered with a non-organic material they use.

To join the Ashes of the Singularity Founder’s program and get instant access to our alpha, visit www.ashesgame.com 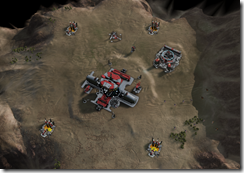 Barren planet will be coming out soon 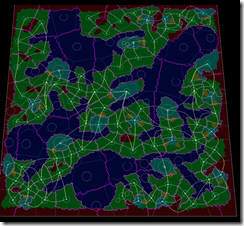