This is going to be a long one…and a bit rambling.

My screenshots are of our current build (0.50) which will be in your hands next week (tomorrow, you get 0.49). 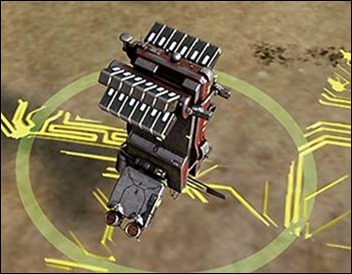 When setting up a match, the map determines the max number of players. For now, we limit it to 4. Our release goal is to allow up to 8 players on a map with 4 of them being human.

We want to support more humans but if we have the choice between having tens of thousands of units OR more than 4 players multiplayer we have to go with having more units. 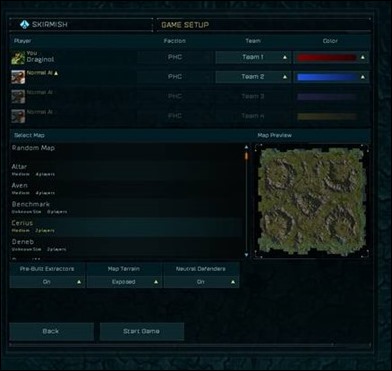 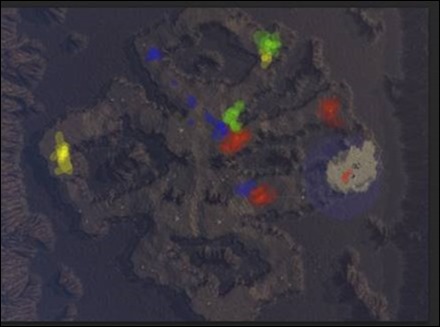 The plan is to allow the player the option to view the map (either all or most of it) with a given player’s forces displayed as their color in a heat map.

What’s not in my crude mockup is that regions will have symbols on them showing who owns them and what is predominantly in that region (Turinium, Metal, Radioactives, Nobles).

It’s impossible to control individual units in this manner because even the largest units would be no more than a pixel (and if we turned everything into icons it would become absurd). Instead, the plan is to have your Control Groups be displayed as a shield with some information around it on the map. You will be able to see your control group on the empire tree along with the meta units within it.

The Strategic View will go through a lot of iteration as we go forward. 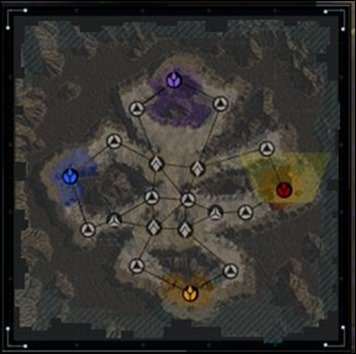 The general UI intent is that ASDFG will let you hot key anything in the command console and QWERT will be the hotkey of whatever the active ability list (with TAB acting to tab between rows).

You, the player, are represented by the “seed” (which we hope goes the way of the Ewok – we never use that word in the game but you guys will know the code name for the player base).

When in Produce view, the things that can be constructed are displayed the same as abilities. When you begin producing something, a number is displayed in the bottom right of the icon and the progress wheel will begin to spin on that icon to indicate how far along it is.

Similarly, if there are a series of techs you want, you can queue them up which will display the number in the bottom right (if a tech stacks, it’ll increase beyond 1) with the progress wheel on that tech.

And with abilities, the same thing. If a given ability costs more to use the more you use it, the number of times you’ve used it will be displayed to the bottom right of it. The progress wheel will indicate how long the effect has left (if applicable) as well as how long it has to cool down.

So if you click on your base (or just on the map in general) you will be able to see what global abilities are available. We haven’t decided yet what ones you’ll start with. Below are the ones we’re fairly committed to for each race.

But there are others we are considering such as:

· Sprint. Target unit can move 2X speed for a limited time. A meta unit may contain 128 sub-units within it so keep that in mind. J

· Invigorate. Everything in the target region gets a 10% boost to whatever it’s doing (producing units, producing resources, etc.). Can be infinitely stacked (i.e. can cast it again and again) but costs more each time you use it.

We are interested in more abilities that stack (i.e. start out cheap but get more expensive the more times you use them).

I have redone the tech tree so much that Brian Wade and Brian Clair are going to murder me if I keep redoing this.

So two things if I disappear:

Now, with that out of the way, we’ve had months to play the game and we’ve learned a few things:

a. Building buildings that do stat increases (like logistics) is boring and not fun.

b. Researching techs to unlock units and buildings is not fun.

As a result, the UI for the tech tree will be an ability grid just like the way we display building units (and activating global abilities). You’ll click your seed building (or just the ground to select it) and click on the Research view to display the 4X3 research grid (QWER X 3).

The updated the Post-Human Tech “Tree”.

Each of these techs are “unsexy” but have an important place in the game. Let’s walk through this.

Your Research Matrices will soon generate tech points per tic. You can spend those points on these techs. 1 Research matrix will generate 1 tech point per tic. The base cost of these techs will be 100. Each time you level up a given category the cost will increase by 25% (this number will get balanced endlessly in the future no doubt).

1. Metal Production. Each Level will increase the production by 10%.

2. Metal Storage. Each level will increase your total storage by 10%.

3. Radioactive Production. Each level will increase production by 10%.

4. Radioactive Storage. Each level will increase storage by 10%.

5. And so on with these exceptions…

If we eliminate the Logistics Array, Metal Storage, Radioactive Storage, Metal Refinery and Fusion Plant that gives us 5 other things that the player can do that are more interesting.

It is our view that generally, buildings are better for unlocking new player capabilities. Two reasons:

(1) You can scout their strategy based on seeing what buildings they have.

(2) It requires some strategic planning on the player’s part.

So let’s revisit some the global abilities we want players to have:

Many of these abilities are very powerful. As a player, I want to know if my opponent is doing this. We could require that special buildings must be built in your home region so that scouting is possible.

We want to keep the number of buildings down in the base game (put too many and the game becomes overwhelming to your early audience). Since 5 buildings are about to get removed, we have 5 buildings we can add.

1. A building that enables Sensor Sweep (must be built in the home region)

2. A building that jams sensor sweep in a target region (can be built anywhere)

3. A building that enables the Gateway ability (must be built in the home region).

4. A building that blocks all enemy ability actions (sabotage, teleport, gateway) into that region.

5. Something else (building that lets units gain XP and level up? A building that unlocks the heal ability, etc.)

6. A building that PRODUCES Noble Gases (rather than it being a resource on the map).

The point being, when you play on big maps, we still want a way to scout what your opponent’s strategy is. And we want something we can later expand on later.

Your comments are welcome.