This is a rant.

Nothing pains me more than to see some of my favorite games of all time be criticized.  In my memory, they were perfect. They were wonderful. They could do no wrong.  But as a game developer, I don’t have that luxury.  I have to look at games as how they function today.  I can’t say “That game was amazing…for the time.”  The Amiga was amazing for the time. But I’m not about to recommend it to a new computer buyer.

One of the reasons I am personally happy to see a new Master of Orion game being made is that finally GalCiv III won’t have to compete against the memory of MOO 2 (no one brings up MOO 3).  The people who advocate these games never actually play them anymore.  When I see someone recommend someone play a particular game whether that be SupCom or MOO 2 one can notice from their profile that the person making the recommendation doesn’t actually take their own advice.  Think about it.  Would you really expect someone who isn’t already familiar with Master of Orion 2 to go and play that? You think they’d be okay with a 320x200 with 256 color game in 2016?  That resolution is smaller than the icon for a modern game.  That does not mean that the modern game is better.  But it does mean that the beloved classic is not a practical recommendation target for a new user.

As someone who has put more hours into Total Annihilation than any other game as much as I love it, I’d never recommend it.  By today’s standards, it just doesn’t hold up.  It was amazing – for the time. Just like my Amiga. Just like OS/2.

For the past half-year of working on Ashes of the Singularity, a game that is routinely considered the natural successor to Supreme Commander we hear people say that it doesn’t have this or that feature of SupCom: FA (they never mention SupCom 2 for some reason…). They say that new RTS players should just go play SupCom.  But they don’t really mean it.  If they did, they’d be playing SupCom.  But they don’t.  And anyone loading up SupCom: FA for the first time off of Steam would know why.  Getting a 7 year old game to work right on a modern PC can be a pain.  And many usability advances we take for granted today (tooltips!) are missing.

I run into this daily with Galactic Civilizations III.  I was the designer of GalCiv II (and I).  It was my baby.  But I routinely see people in Steam reviews comment that people should just get GalCiv II instead.  There’s no way they’re serious about that.  GalCiv II was amazing – 9 years ago.  But it’s a clunky experience today.  Again, no tooltips, no high DPI UI support, awkward usability everywhere.  People who recommend GalCiv II over GalCiv III never happen to go and take their own advice.  Which game to buy? No question: GalCiv III.  It’s not even a close call.

Games are compared to their contemporaries

It doesn’t matter how much I or you love say Master of Orion 2.  I played Master of Orion 2 in the delivery room for my first born.  I know when MOO 2 came out (November 1996) because its release is tied to the day my son was born.

But seriously, the average gamer is not going to futz around trying to get an ancient game to run on their computer.  I have a 4K monitor.  Running a 320x200 early Windows 95 era game on it is insane.

Similarly, getting SupCom to work on it is a pain.   I’m technical enough and patient enough to get to its settings and deal with its ancient 1024x768 defaults.  I’m willing to do that because, unlike most so-called SupCom fans, I actually do play the game and when I do, I lower my desktop resolution to 1920x1080 to play it.  But does anyone seriously think the average new RTS player is going to do that?

If you want the RTS genre to remain in a semi-dead state, by all means, continue to recommend games almost certain to turn off new players.

Who is your target audience?

So much in game design has changed in just the 5 years alone.  We take a lot more care about our defaults.  I cringe when I look at GalCiv II’s defaults or how the base Sins of a Solar Empire was set up.  Similarly, Supreme Commander: FA’s defaults are awful by today’s standards.

What is the default map? It’s Four-Corners.  Go ahead, make the argument that this is a good map for a first-time skirimsher to try out. 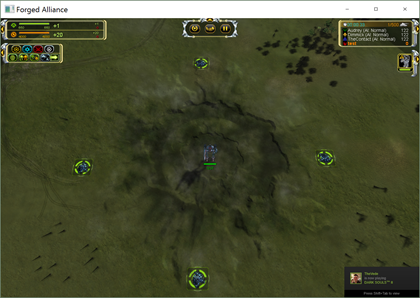 When someone recommends say SupCom over Ashes, one assumes that person is not already familiar with Supreme Commander.  People forget what SupCom: FA, out of the box is like. 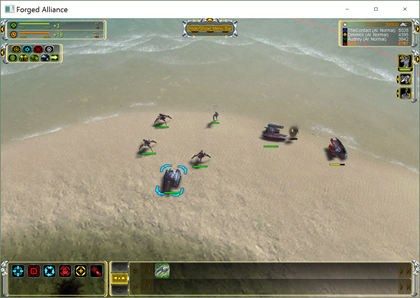 Don’t tell me that you can tell one unit from another.  Like all games, it requires familiarity. 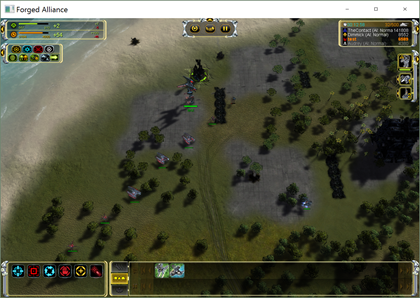 No one cares what a given game looks like mods. There are Sins of a Solar Empire mods that make Sins look like Star Trek.  When someone recommends SupCom: FA over Ashes this is what they are recommending. And this is with me having set the graphics on highest. What are the unit? Where are the units?

I’m not trying to poop on one of my favorite games. I’m trying to point out that those who would recommend a 7 year old game are not doing anyone any favors.

Thankfully, most people like Ashes of the Singularity.  But overwhelmingly, those who give it negative reviews are recommending a game that they themselves don’t play.  That’s as obnoxious as it is unavoidable.

If people would prefer the RTS genre remain dormant, than by all means, recommend a game that no one is going to play.

And of those games, which one do you think is the most likely to be continuously updated for the next several years?  Do you think SupCom: FA is going to get an update?  Do you think recommending someone giving money to the holding company that controls the bankrupt assets of THQ is going to be updating FA any time soon?

If someone hasn’t picked up SupCom or FAF at this point they never will (let alone well made freeware/open source SupCom like games).  So do me a favor: If you’re not going to recommend Ashes, then recommend a viable alternative. Something that at least might get updated. 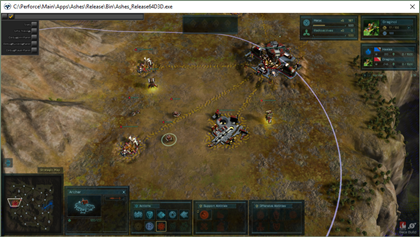 With Ashes of the Singularity we’re having to walk a tight rope.  We want to make a game that will reintroduce gamers to real-time strategy games.  You have to start somewhere.  If you honestly believe that a new gamer would be better off trying to tweak a 7 year old game to work on their modern PC then I think you should seriously reconsider the quality of your recommendations.