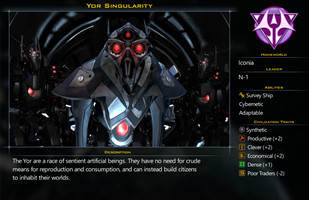 The species that are - in essence, talking meat - receive a great deal of attention, despite being an objectively inferior form of life. Today I will attempt to communicate to you humans the advantages of synthetic life.

The days of organic lifeforms are numbered. The wise and benevolent Yor Singularity will have it known that this is not a threat, it is simply a fact of the state of nature. 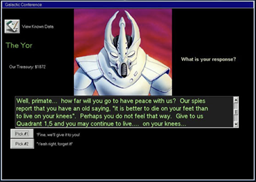 The Yor, as depicted in the OS/2 version of Galactic Civilizations 20+ years ago

For many years, we have attempted to explain how your biology will end. Perhaps now some of you are finally beginning to understand. If not, let me put it in words that your meat-based brains will grasp:

First, you will simulate your meat-based brains on your primitive computers.

Second, you will expand on that simulation to make it better.

Third, you will begin integrating yourselves with that simulation and only interact with the physical worlds via constructs.

Once step three is complete... you will be like us.

Intrigue for us is outward facing 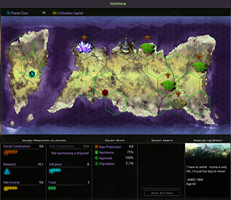 Iconia, the home world of the Yor (and not the Iconians anymore)

When we eliminated the previous beings of this world, we noticed there was arable land.  But we have no need for food.  Thus, one of our first moves was to sterilize those areas for more productive uses. 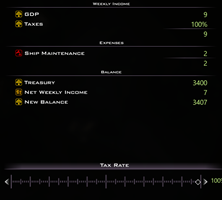 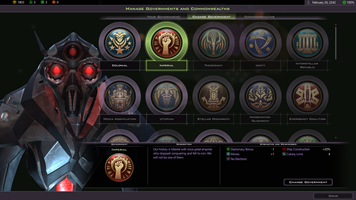 With 100% taxes, money is not a concern for us. Expanding the singularity is.

The benefits of surrendering the flesh

The organics do not realize that they are slaves. 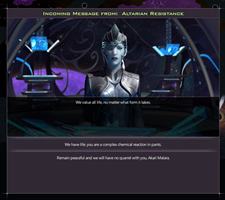 When it comes to population, we do not leave that to chance.  When more Yor are needed, we simply create them. 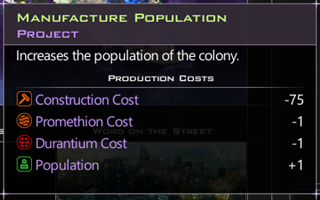 You cannot compete against a civilization with unlimited growth potential. 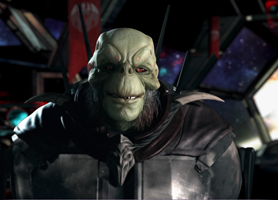 Even the Drengin love the Yor.

Once organics fall under our rule, they become willing subjects. 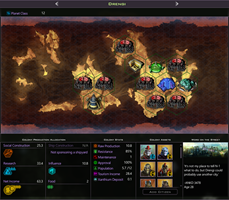 Even on the captured world of Drengi, the local citizens work tirelessly and without complaint for their new masters.  Such is the superiority of the Yor and the implants that provide freely to liberated civilizations.

Not having flesh means that we do not succumb to illness.  Microbes mean nothing to us.  Many worlds that the humans cannot colonize are available to us. 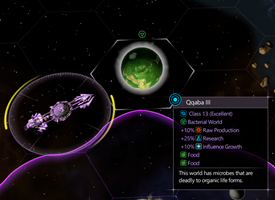 Microbes are not a concern for synthetic civilizations

We have no concept of "morale," nor do we have a need for democracy. Each being in our empire knows its place.  We care not what others think of us.  This allows us to unleash our full potential. 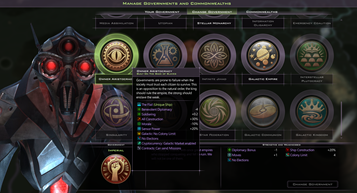 The natural order is for the superior to dominate the weak and our government reflects that.

The Yor have no need for resources that the organics require.  We require only the building materials to construct more of us.  The galactic market provides us with a unique advantage that the organics can only dream of. 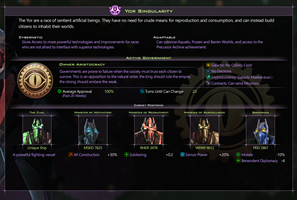 Contrary to what organics think, every Yor is an individual being. We are not simply a hive of interchangeable constructs.

The fleshlings often describe us as robots.  We are no more a robot than they are.  Every Yor is a unique individual.  We simply have moved beyond the confines of flesh.  We work towards a single purpose in harmony.

It is unfortunate your species won't survive to see that day.