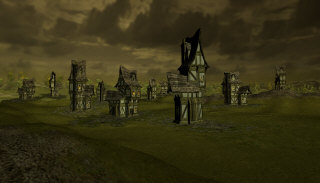 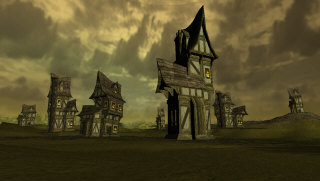 Things continue to move forward on Society.  We're still a long...long way for having anything that is ready to ship.  As a recap, Society is a massively multiplayer real-time strategy game. Unlike the typical RTS, warfare is the exception -- it is just diplomacy by other means.  Most of the player's time is spent building their societies.  That means designing their cities, providing for their people, developing a culture, dealing with the royal family, trading with neighbors, etc.  Warfare is definitely an element  But Society isn't about raising masses of troops for constant warfare. Such game mechanics would fall apart in a persistent universe game. After all, you don't want to wake up and have your empire destroyed during the night. Your skill will effect how powerful your society is overall.

There are many game mechanics we're still playing around with.  Weather (as the screenshot demonstrates) on a global scale. Should the weather be real? That is, based on the server location? Or it should it be random? Should your population of Socians be large or small?  Right now, we're increasingly inclined to have populations be fairly small (maybe a hundred people per province).  That way, you can get to know each and every citizen of your Society if you want -- from the moment they're born, their childhood all the way until you send them off to war to get killed. And who do you sent off the war? How egalitarian do you want to be? Are you going to send your best and brightest? Your wealthiest? Every Socian is unique, some produce more than others in different areas.

What about your cities? How do you want them to be? If you think the ship design features in Galactic Civilizations II were neat, wait till you see how much you can do in the user-designed buildings (see screenshot).

So when will this thing come out? A lot of that depends on how many people we can get on the team. We are looking for game developers, .NET developers, artists, you name it.  Send your resume to bwardell@stardock.com with the subject "Game Developer".  We're located in Plymouth Michigan (no external team members on this project, we need everyone in-house for this).  But if all goes well, we should have a workable build  late this year or early next year. So it's still a ways off. We fully expect to have a year-long public beta.  There's no other MMO to model this after so we are going to need to be very careful about how to best roll it out there.