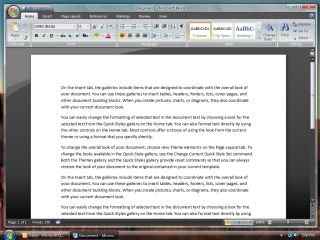 The next major version of Microsoft Office, (Office 2007 but what I'll affectionately call "Office Vista") is the single biggest change to come to Microsoft Office since, well, as far back as I can remember.  The problem the Microsoft team was coming up against is that Office had gotten so complicated, so "bloated" and so complicated that most new feature requests made by users were for features already part of the package.

The new Office includes a new user interface across all the programs that make up the suite.  The title bar has been altered to have its own unique glass style with buttons that make use of the most common features of the application.  The menu bar has been largely jettisoned and replaced by what are being called "Ribbons". Until I saw the most recent version of the beta, I was skeptical as to whether this was going to work out.  But having seen it in action, I am converted. It really is slick.  Gone are the "we know what you want" type UI behaviors and in its place are interfaces that streamline the entire experience.

The ribbons allow users to do the kinds of things that most people want to do with as little work as they need.  Power users in particular can be happy that there are tons of options that can greatly speed up common tasks. 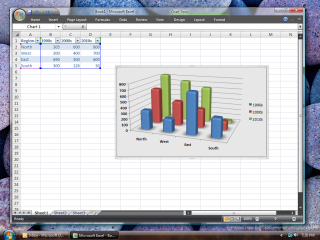 The next version of Office will run both Windows Vista and Windows XP.  On Windows XP, it looks a bit different (and in my opinion) quite fantastic. 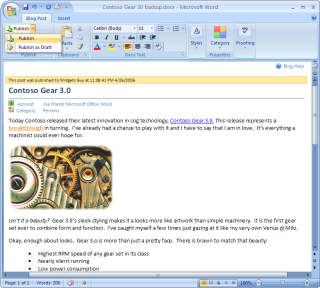 As the above screenshot implies, blog posting (source: Microsoft's Joe Friend - not under NDA) is one of the features of Microsoft Word.  While not good news necessarily to the third party programs that allow people to compose blog posts, it is good news to most users.  When  a user decides to create a blog with Microsoft Word, it takes care of the uploading of images and everything else to make the entire thing relatively painless.

And don't worry about what you upload being a bunch of whacky HTML, the Office team is working to ensure that what gets uploaded is the cleanest possible HTML.

The release date for Microsoft Office 2007 has not been announced officially. But beta 2 is due "soon".  I don't know about you but I'm very excited.  For years, Microsoft has kind of sat on its laurels with Office, adding bloat and complexity to it.  Now, Microsoft seems very serious about going back and reinventing the world's most popular suite of office applications.