We're still tweaking the algorithms for The Political Machine and for what it's worth, we have put together our first official model prediction of this November's election based on our current variables (which are obviously subject to change).

Bush loses to Kerry by between 20 to 40 electoral votes. There are a few reasons we're predicting this.

First of all, there really aren't that many toss-up states. The media has states like Michigan and Wisconsin and Washington State and Oregon as toss-ups. The only possible way they're toss-ups is if Ralph Nader is able to get a significant share of the vote. But even there, people who think Nader is going to get 6% of the vote aren't realizing the infrastructure involved in getting onto the ballots in all the states and maintaining some semblance of momentum.

So who should be Kerry's Vice Presidential pick? If he's smart, he'll pick Richard Gephardt. By bringing him in, he gets Missouri and probably Iowa (our model doesn't yet handle the VP pick effect very well). So write this prediction down so that if we're right we can be oowed and awed appropriately:

Now, you say to yourself, how can you be so sure? We're not. We're confident we'll be close but there are a few real toss-ups in which the events between now and election day will matter. Here are the real toss-up states:

Ohio
Missouri
Iowa
West Virginia
Bush has to win all of these to win. Barely.

States that COULD become toss-up states based on events:

New Mexico
Arkansas
Wisconsin
Bill Richardson as a VP pick could shore up NM if something causes it to be a toss-up, but that's unlikely. General Clark could bring Arkansas into play.

Some pollsters have said that some blue states have become "purple". I'd like to know which ones they think are purple now. I can't think of any blue states that have softened since 2000. Wisconsin? Possibly. But only if Nader becomes a major factor there again. We do think Florida will be much more solid for Bush this time, for what it's worth.

But go ahead and look at the map above, which states do you think Bush will win that we're wrong about?

We'll keep making predictions, after all, what good are computer models for? And you can then check the accuracy after the election to see how well we did. 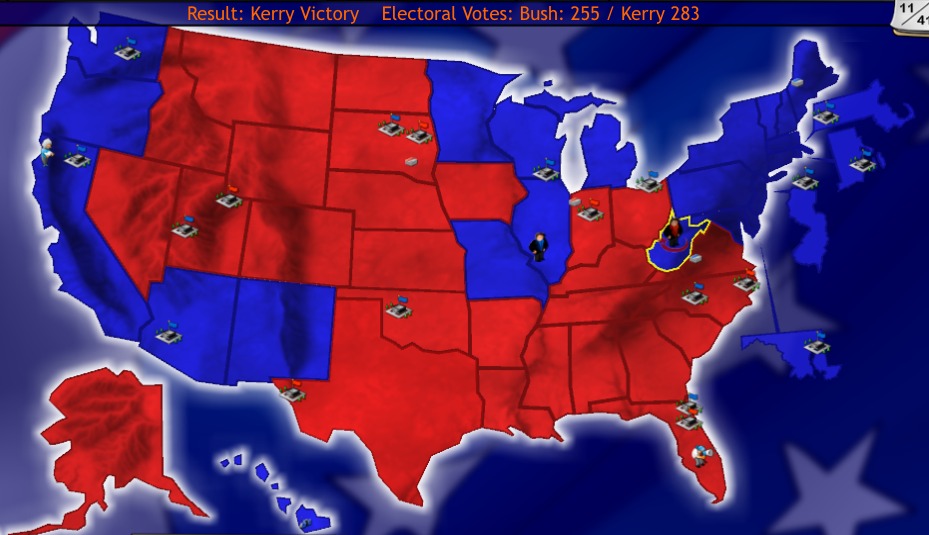