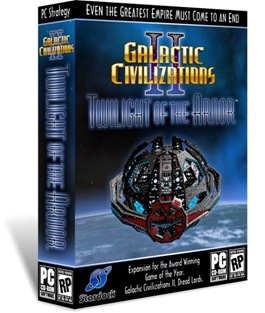 Galactic Civilizations II: Twilight of the Arnor has been released!

Stardock is pleased to announce the general availability of the second (and final) expansion pack to Galactic Civilizations II.  The new expansion pack, Twilight of the Arnor, adds hundreds of new features, gives each civilization a unique technology tree, a unique set of planetary improvements, star base modules, ship parts, and more.

Moreover, with Twilight of the Arnor, Stardock went back and revamped the graphics for the game to bring them up to the state of the art.  A new sound track has also been added along with updates to the computer AI.  It also reintroduces the Terror Star, the ultimate weapon last seen in the original Galactic Civilizations as well as a new victory condition called Ascension. Online tournaments have also been added to allow people to compete at playing the same map and scenario and submit their scores to the GalCiv metaverse.

The expansion also includes the conclusion to the Dread Lords saga in the form of the Twilight of the Arnor campaign.

And finally, to keep the game evolving for years to come, Stardock includes a half dozen newly developed editors that will help modders and end users alike such as a map editor, scenario editor, campaign editor, tech editor, ship component editor, and much more.

The expansion pack is $29.95.  It requires the previous expansion (Dark Avatar) to also be installed. New players can purchase the integrated "Ultimate Bundle" for $59.95 and get the entire Galactic Civilizations II saga.