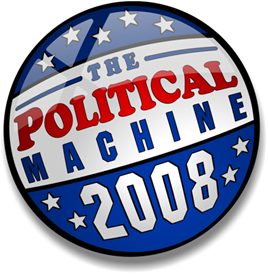 The Political Machine 2008 is a PC strategy game in which players run for President. Players choose the scenario they want to play in (USA 2008, USA 1860, “Europa”, and Drengi), choose a candidate (or make one) and then do what needs to be done to rack up the electoral votes on election day.

The game includes a campaign mode in which players go up against increasingly more difficult computer controlled opponents as well as Internet multiplayer in which players can play others online.

The 4 scenarios that the sand box mode (quick play) includes are:

4)      Drengi. Run for leader of the Drengin Empire (the evil aliens from Galactic Civilizations).

We recommend playing the quick play with one of the 4 scenarios for review purposes as it is the most common way people will be playing the game.

The data for Campaign 2008 is based on real-world information such as census data, exit polling information, and a variety of other sources that when combined, give us a pretty clear picture of what the current issues are and the position of different politicians.

The Political Machine is most definitely a strategy game, not a simulation. We have tried to make it reasonably realistic for the Campaign 2008 and the US Civil War scenarios, while the other two scenarios are there for fun.

Players can face off against either computer-controlled opponents, or humans over the Internet via the included matchmaking service. Best of all, the Political Machine 2008 retails for only $19.95, less than half the price of a typical new PC game. 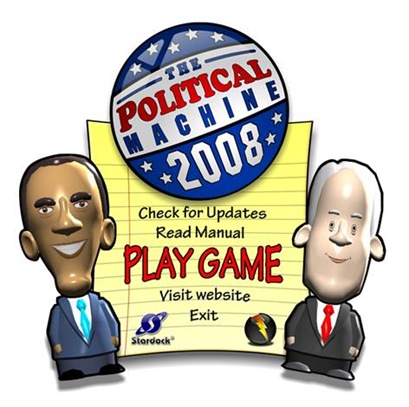 When starting The Political Machine, make sure you check for updates.  Stardock will be updating the game polling data throughout the election cycle. As the campaign progresses, different issues will take on new default importances. 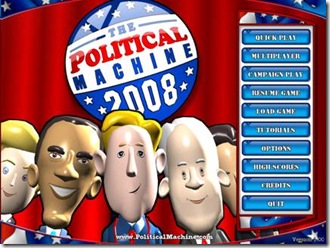 Once you start a game, you are asked to pick a scenario: 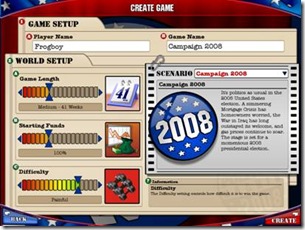 With the scenario you can pick how long the game lasts. We don’t recommend going over 41 weeks unless you are a real die hard. Even a political junkie such as myself finds the epic settings to be quite grueling. 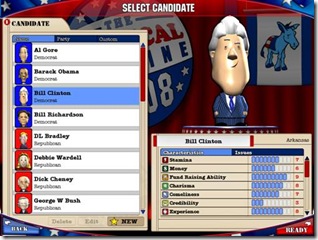 Figure 2: Select an existing candidate or create a new one.

Existing candidates have set statistics.  When we designed the game, we tried to let the game’s underlying mathematical models do the work but when creating the default candidates, we did have to make some judgment calls on real-world candidate specifications.

Creating your own candidate

If you choose to create your own candidate, you have total control over everything about them. 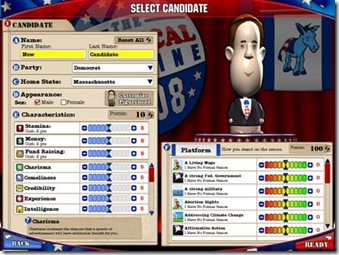 Figure 3: Create your own candidate

By default, all of your stances come from what political party you choose. You can override the party position by taking a formal stance on an issue. 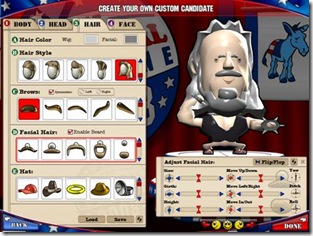 Figure 4: Did we mention that everything about the candidate can be changed? 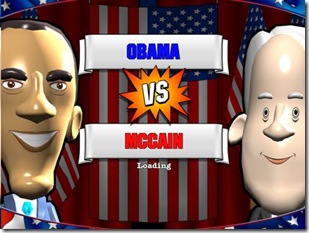 Once you are in the game, you see a map of the scenario’s country that you are running for President of.

Each state is worth a certain amount of electoral votes. To win the state, you need to gain awareness in those states and get the voters in that state to prefer you over your opponent. 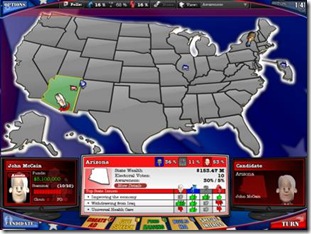 Players start out in the home states of their candidates.  The resources candidates have are:

·         Money. Players need money for virtually everything. Players can gain money either by fund raising in a particular state (the wealthier states provide more money) or from building campaign HQ’s which generate money based on what level they are.

·         Stamina. This determines how much your candidate can actually do in a given turn. Every action from traveling to giving a speech uses stamina.

·         Clout. Clout is generated from outreach centers which you build.  Clout is then used to win endorsements which are critical to victory.

There are countless ways to play the game, my suggestion would be to decide early on which states you absolutely need to win and begin building campaign HQs, outreach centers and consulting offices in those states. That’s because your structures generate awareness in those states which is one key thing you will need.

I recommend building campaign HQs early on because they generate money and you will need a lot of money later on.

At the top of the map, there is a combo box which lets you view the map in different ways. Poltical Strategy lets you toggle states between blue (Democrat) and red (Republican) so you can figure out which states you really need to win.

Not all states are equally easy (or hard) to win for your party. Some states are just naturally liberal or conservative.  For instance, a Republican is going to have a hard time winning New York but a much easier time winning Texas and vice versa. 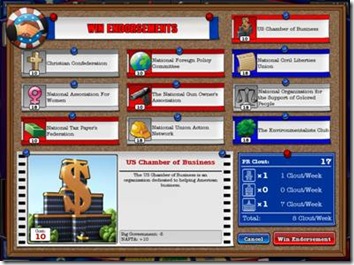 Winning endorsements is crucial. They require a certain amount of clout to win and some are more expensive to win than others based on your political party. Each scenario has different endorsements.  You must win many of these to have a chance. 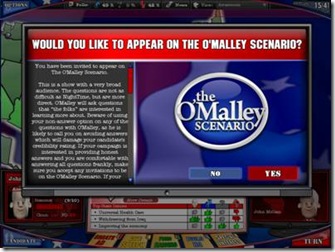 Every so often, a popular cable news show will appear that you can visit. These include “hard hitter”, “the colvert report”, “the o’malley scenario”,  and “barry king live”.  They appear in the game as TV cameras. 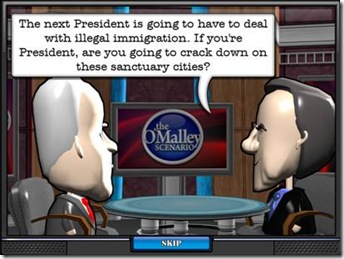 Each show has its own unique set of questions with multiple choice answers. Based on the answers, the player’s overall rating with voters is affected. 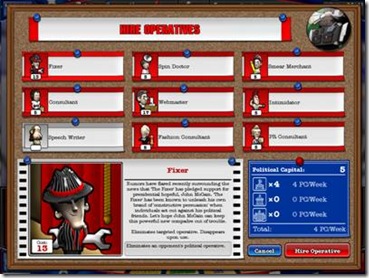 Political operatives are special units that the player can buy using their political capital (received from consulting offices).  These operatives have a wide variety of powers but get increasingly expensive each time you hire one. 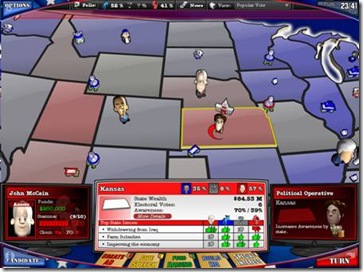 Figure 8: Players can zoom in to any part of the map. 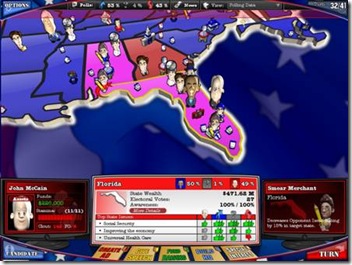 Figure 9: Battle ground states tend to get a lot of operatives and ads in them.

In each state, the percentage of the population that considers themselves a democrat, republican, or independent is different.  So some states are easier to win than others depending on your political party.

The game essentially takes your position and compares it to the positions of voters in that state and provides a score.  It then multiplies that score by your awareness (how much people are aware of you in a given state).  Then the engine compares that to your opponent’s score and awareness, and generates the number of votes.

Voters also care a lot about things like charisma, comeliness, credibility, and experience.  These traits are equally important and are valued by voters in a state at the same level as the default value of the most important issue.

Players can also go onto television shows like the ColdCut Report, the O’Malley Scenario, and other cable TV shows where they are asked questions on various issues which will greatly affect their score. 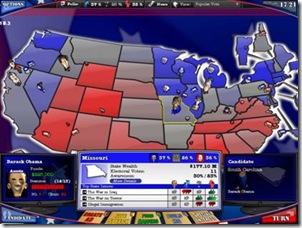 Figure 10: Use the view combo box at the top to control the map views

The Political Machine 2008 is available at most retail outlets starting the week of June 17, 2008. It is also available directly from www.politicalmachine.com.

It will also be the first game to support Stardock’s new digital distribution platform, Impulse, as well as support the new Common Multiplayer Platform which is being used for future Ironclad, Stardock, and Gas Powered Games titles. 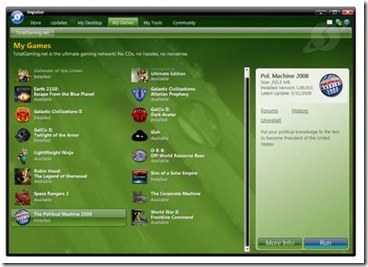 Third party titles from most major publishers will be available on Impulse either on launch or shortly after launch.

The PC game industry has kind of drifted into two very different directions.  You have the big name releases that are typically $40 to $60 and then what are called “budget” titles or “casual games” which often feel like they were made by “some guy” and are sold in a jewel case by fish screen savers at the store.

It doesn’t have to be that way.  How about bringing AAA quality to a title that’s only $20?  The Political Machine isn’t just a really fun and timely PC strategy game. Its production values match anything one would expect at $40.

·         A fun and sophisticated character creator

·         High quality graphics that can smartly scale based on the hardware so that people with older computers can play it as well as people with top of the line systems.

Plus it has Stardock’s traditional policy of free updates after release with new features.

In 2004, Stardock released the Political Machine 2004 which received generally favorable reviews. However, while reviewers felt that while the 2004 edition was addictive, the consensus was that there wasn’t enough replayability due to having only one scenario to play and limited game options.

1)      Multiple Scenarios. Before there was only the U.S. campaign; now there’s three others with two additional coming after release.

2)      More types of operatives to hire, which gives players more tools to play with.

3)      Custom candidates. Players can literally design their own candidates now. They don’t have to use the pre-built candidates, but can control how they look and their positions at the start of the game.

5)      The polish level of the 2008 edition is much higher, with improved multiplayer, better graphics, a true 3D engine, issue descriptions, etc.