I’m running the BETA of Windows 7 and it’s been running so well that I’ve decided to make it my quasi-production machine.

Windows 7 is a massive usability upgrade from any previous version of Windows.  Much of the changes are just minor in terms of effort but just make the whole system feel a lot better designed.

For example, if I want look at my connected devices I see this: 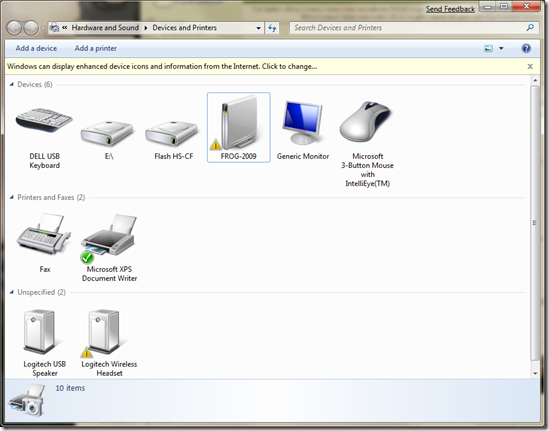 Notice I don’t see a bunch of crap. I just see the stuff actually connected to the machine. It’s a very nice change from what has been in Windows before.

One of the purposes of this series of articles is to let you know what programs I have problems with, and which ones work right.

Over the coming weeks and months I’ll give you generalized reports on the progress of our software (Stardock’s) running on Windows 7 as well as highlighting cool little touches in Windows 7.