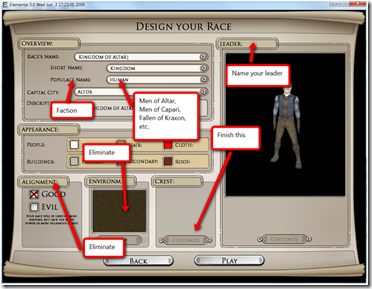 So much going on this week and at the same time, so little. A lot of vacations here at Stardock pop up in June since this is one of the prime months here in terms of weather.

On a sad note, Trent (Mittens) had his last day today. He’s off to Salt Lake City to take a position as a designer at a new game studio.  We’ll miss him.  Combined with the people on vacation, the studio area feels like a ghost town.

My executive planner and marketing manager gave me a “CEO make over” today with a bunch of new clothes. I guess trade show shirts and ratty shorts just aren’t good enough anymore.

Right now, we’re looking at dozens of issues that need to be addressed before we can even do the alpha build of the game.  Everything from the fonts looking crummy to setting priority on what should be on the setup.

For instance, if someone wants to create a custom civilization and in there choose “good” or “evil” that’s fine. But I’m having them get rid of being able to have pre-existing factions be good or evil because it would literally double the writing involved for each faction’s back story.  While that’s interesting to have, I would rather have more depth per faction rather than half the depth but a mirror universe version of each one.

The screen you see here will likely be significantly altered between now and release. But this gives you an idea of how iterative the process is.  I’ll probably eliminate the appearance area and put that into the custom race area. Right now, “design your race” is the only option. There isn’t a formal “choose your faction” area.  Elemental comes with 2 built in races and 12 factions but we plan to let people create their own races and factions as well, but that should be a separate area that is a lot richer. If you try to mash too much stuff together, it’s confusing to new players but still too weak for experienced users.