Our friends in the Demigod community seem to like having journal entries that answer a lot of questions in one swoop so we've decided to do the same in Elemental.

Q: What is Elemental?

A: Elemental is a fantasy strategy game (turn-based) developed and published by Stardock Entertainment. In it, players take on the role of a powerful sorcerer known as a "Channeler" whose goal is to build a kingdom and restore the devastated world of Elemental back to its former glory.

Opposing you are up to 11 other kingdoms and empires who have a similar objective except with the world under their control.

Players can win the game in a variety of ways including achieving the spell of making, completing the quest of mastery, diplomatic victory as well as the traditional military conquest means of victory.

The game puts most of its development focus on the single-player experience but there will be multiplayer as well with clans support (kingdoms and empires) and a series of multiplayer modes (and single player modes) that let people play the game in some unusual ways.

Q: Are the screen shots we see indicative of the final quality?

A: NO! The engine we've developed is still being enhanced. For instance, in the screen shot above, the shadows aren't in yet. There are still a lot of features left to be put in visually.  That said, one of our primary objectives with Elemental is to have a game that has unprecedented flexibility in terms of the systems it can play on: Netbooks all the way up to 64-bit Core I7s with monster video cards.

Q: What about modding?

A: Elemental will support in-game modding where users can create their stuff and submit it in game. It then gets moderated and becomes part of the game world. Players can decide which mods they want to use (ones just from Stardock, favorite ones, categories of them, etc.). 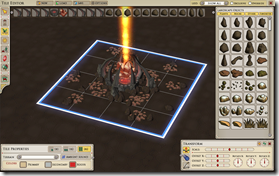 Q: How many factions are there?

A: There are 12 pre-made factions made up of 2 official races (Men and The Fallen). Each faction will play substantially differently. Players will also be able to create their own factions and modders will be able to add more races.

Q: What kinds of other creatures are in the world?

A: Elemental has a large set of species that inhabit the world. They are, however, individually rare and much of the strategy of the game is to recruit some of these creatures onto your side.  You will not be able to, for instance, simply "build" dragons.  The only units you can build are those of your race.  Other races (Dragons, Demons, Ogres, Yetis, etc.) are ones that you have to actively recruit to join you.

A: We expect to have an alpha out in the next 30 days that will be available on a very limited basis. However, we anticipate launching the beta officially at the Penny-Arcade Expo on September 4th. This beta will be available to anyone who has pre-ordered the game.  Be warned though, our betas are not fun. They're real betas which means they're incomplete and unbalanced. But through these betas, users can help mold the game by working with us online.

Q: I've heard this game referred to as "Master of Magic 2"

A: While Master of Magic is definitely a major source of inspiration for Elemental. A lot has changed technologically since then that we (game developers) couldn't do back then. In an age of multithreaded supporting OSes, we can have much better computer AI for enemy players and game mechanics that benefit from what is possible today (3D engines for doing very very nasty things to the game world when you have enough magic -- think Populous).

Another example is how cities can be handled now. There isn't a separate interface for managing cities. Cities grow on the main map itself. When players click on any part of the city they get the options for the entire city right away on the same main UI. The idea is to keep the user interface out of the player's face and let them concentrate on playing the game.

That said, there's a lot of influence here. Tactical battles, for instance, will have some inspiration from XCOM (though much shorter in length).

I would describe the games as being in the same family of the same genre. But someone looking for a Master of Magic 2 would not likely find Elemental to be similar enough to be considered a genuine sequel.

Q: What are some of the game modes you have in mind?

A: We are looking at having a lot of different ways of playing the game other than simply the classic "start a kingdom, conquer the world".

For example, we are looking at game modes where players can just play an extended tactical battle.  Another example is "duel" where 2 humans play against each other with the AI players as pawns in their struggle.

The idea being that we want to let players play games that are very short in length if they want or can potentially take months to play.

Q: Will there be native 64-bit support?

A: That is our intention. Right now we are relying on Intel's Havok for the physics of Elemental and so it will largely depend on where its support of 64-bit is.

Our engine, however, will natively support 64-bit thus we want to provide (with the game) both a 32-bit and 64-bit version.