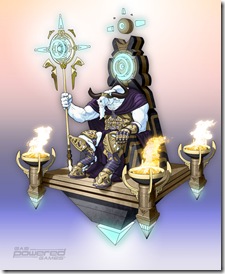 Some people had guessed Oculus since there were the beginnings of him in some of the LUA XML inside of Demigod itself.  Some of the concept was there but none of the actual assets had been created (that’s what’s being done now).

The idea with Oculus is to have a general that has some ranged weaponry.  In some ways, Oculus is a new type of general in that existing minions you acquire actually provide specific benefit to him.

Now, with regards to the release of the 2 new free demigod add-ons, we are hoping to show something at PAX but the actual character models are still being finished up so it’s looking unlikely that we’ll be able to show anything before the end of the month).  But we’ll be putting up more and more details as the assets start to come in.

Oculus is a Ranged General fighting for the Forces of Light. He wields a staff that shoots magical bolts.

Oculus is an offensive general using lightning for various effects. His Chain Lightning can arc through the enemy’s ranks, and he summons ball lighting that battle for a short period of time before exploding. He aids his allies by healing them when he takes significant damage, and he can restore their mana.

Oculus has significant magical skill, but a great deal of his power comes from synergy with his army.

Activated ability. Oculus unleashes a bolt of lightning that arcs to nearby enemies. Damage and number of arcs increases as the skill increases.

Enemies afflicted by Chain Lightning cannot regenerate health or mana for a short amount of time.

Activated ability. Oculus releases lightning underneath his throne, knocking back enemies at the start and landing points, and launching himself to a new position.

Activated ability. Oculus selects a target end location. He summons ball lightning that will move to that location, fighting anything along the way. Number and strength of ball lightning increases as the skill increases. At later ranks, Ball Lightning will increase the attack speed of nearby allies.

Ball Lightning explodes when it dies, damaging nearby enemies.

The target of Oculus’ Mana Surge has reduced cooldown time.

When Oculus takes a large single hit, he heals nearby allies based on the strength of the hit.

King of the Minotaurs

All allies near Oculus have a chance on hit to blast lightning at their opponent, dealing minor area damage.