We’re not trying to torture anyone with these sneak peeks.

For the past couple of weeks we’ve been playing with new builds of Demigod sent over from developer Gas Powered Games.

Now, since I work at Stardock, the publisher, I’m biased. I make no bones about it. But as the designer and one of the developers of Galactic Civilizations and the forthcoming Elemental, I do have some perspective on the work GPG is doing with these demigods.

As someone who is biased a bit towards quantity over quality, I have been somewhat skeptical about the effort involved in making these demigods. If I were the designer of Demigod, the players would simply create their demigods from scratch at the start of the game rather than “pick” one.  That said, seeing GPG’s work has given me a real appreciation of the craftsmanship at Gas Powered Games.

The Demon Assassin will be an exciting addition. He plays very differently than any other demigod I’ve played and yet he also feels natural to the game play. He’s incredibly powerful but also very fragile.

I normally play as either Oak or Lord Erebus. In either case, I don’t tend to die often because I quickly amass a lot of HP.  The Demon Assassin, by contrast, is (obviously) not a general which means no monks to start out with and he has much lower armor and HP than most of the demigods.

On the other hand, he’s lethal.  By the second level, a fully mana’d DA can inflict 650HP of damage.

Here are the powers that I think people will find exciting:

He is incredibly dangerous – in the right hands. He’s also a massive feeder in the wrong hands.  At level 4, with HP giving armor and such, I had 2275HP.  With Erebus or Oak I’d be at over 4000 at that point.

What? Give him Blood of the Fallen? No problem? Except he’s fairly slow at the start.  He is almost begging for Swift Ankle Bracelet.

Here’s a video of his skills. 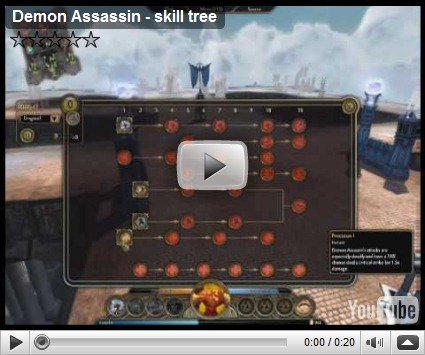