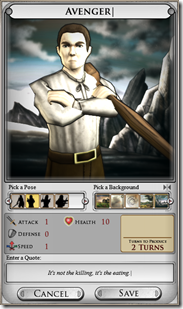 First, I’d like to apologize as we had promised that the betas would suck until Beta 3.  Oh, they still suck. But because we need to get this feature in earlier than later, something fairly cool is getting in early.  I will say that we will make an effort to avoid any cool features getting in early in the future.

So in today’s beta update, players can design their own units.  But in Elemental, units are represented by cards from a UI point of view.  To make this a useful feature and not just cosmetic, players can design their cards.  The reason this is useful is because players can change the background and pose of the unit. As a result, we can shrink the cards down very small in the UI where we need and players will still know what they represent because they were the ones who designed them.