We need your help.

For DesktopX 4 our goal is to clean up DesktopX and put it in a place where we can start to build up on it again in a way that is, to be candid, economically viable.

So to start here is what we have in mind specifically for DesktopX 4.0:

It has been a long time since we have updated the content in DesktopX 4.

To many of you, this sort of thing isn’t that big of a deal. But to end users, having animated objects on their desktop that do interesting things can be very enticing.

This is where we need your help. I’m sure there are plenty of posts that outline this or that issue that users would like to see addressed. If someone can consolidate them that would be extremely helpful so that we can look and see which are doable, which are doable but only helpful to a tiny number of users, and which ones just can’t realistically be done.

As a practical matter, we won’t officially include or support anything that doesn’t work perfectly on Windows 7 with UAC on its default setting.  That doesn’t mean users can’t create things that require UAC to be off or only work on Windows XP but those things won’t be supported by us. 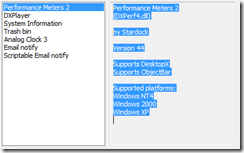 Going forward, we won’t be developing new plugins. We just don’t have the budget for it. We never had intended on creating any plugins beyond samples (otherwise, we would have just made the features a base part of the program).

If someone wants to submit to us plugins they’d like to include with the program (we’d need source code for liability purposes) let us know.

Things likely to go away

We will probably move away from taskbar and system tray functionality. It gets increasingly difficult to manage that sort of thing. If someone wants to create a plugin for it, that’s great but we want to move away from having to having to support such functionality because every version of Windows ends up with a different way of getting to that data (particularly the system tray).

So that’s where we’re at