As promised, we are going to start putting in Beta tester NPCs into the game.

If you want your NPC in the game here is what you need to do:

When you create this guy/gal, bear in mind that this is going to be an NPC. So don’t max him. He shouldn’t be as powerful as your sovereign so don’t use up your points. 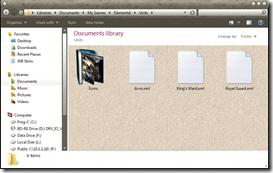 This is relatively easy. Open up your created unit XML. Add these lines (preferably at the end just before the closing of </UnitType>:

Also, remove the <IsSovereign>1</IsSovereign> if you don’t want him to be one of your sovereigns to choose from.

Then change the display name (<DisplayName>) to Champion. 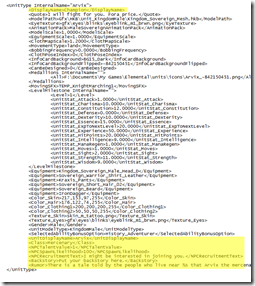 You can test out your NPCs right now. Do the above with the file that is in your my games\elemental folder and add the tags I mentioned and your NPC should be in the world.

Here’s my NPC wandering around 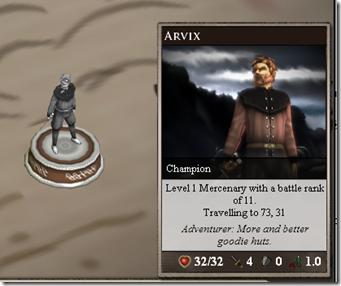 Other Tips and Tricks

We use the NPCTalentValue to determine when then sovereign will spawn. 1 means they show up at the start of the game. The rest are triggered by getting a technology or an event.  For instance, we might choose to have a random event where the world is invaded by Demons and have a bunch of demons show up and have the NPCTalentValue be 37 or something.  The higher the number, the more powerful the unit.

NPCSpawnLikelihood is what we use to determine the likelyhood of it showing up. Eventually 1000 will mean it will definitely show up and 1 will mean there is a 1/1000 chance it will show up in a given game.

When you upload your NPC, include your name so that if we use your NPC, we can put you in the game’s credits.