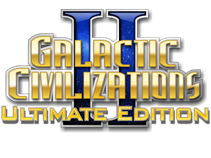 The Milky Way Galaxy of the 23rd century is a brutal place.

The malevolent Drengin Empire and their allies, the Yor reign supreme.  Earth and its allies have been defeated and in most cases, occupied by Drengin shock troops.  Earth itself remains free, protected behind an energy shield put in place by DL Bradley, commander of the Terran fleet just before they vanished.  Though protected, it is surrounded by an armada of Drengin ships.

The ancient Precursors are gone forever. There will be no help from the benevolent Arnor.

And this, my friends, is where things were left off at the end of the best-selling, critically acclaimed PC Strategy game, Galactic Civilizations II: Ultimate Edition.  But it isn’t the end. That’s all I can say on that for awhile.