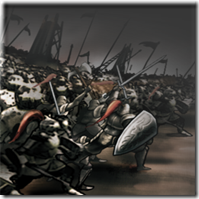 The plan is to put out Beta 4A and then collect as much feedback as we can. Seriously, NOW is the time to ask for stuff (within reason) because when Beta 5 comes out (next month) we’ll be in feature lock-down. No new features until after release.

Now, we have a few questions for you guys:

(2) You can already go to www.fallenenchantress.com btw to go right to the page.

(3) What sorts of additional magical spells would you like to see us add before release that aren’t already in the game?

(4) What sorts of additional quests would you like to see?

(5) Random events – yes, we have them but we don’t have a lot. Now is the time to suggest them.  Ideally, ones that don’t require crazy amounts of work.

(6) I will be needing your help on strategy for the AI.  When you play Fallen Enchantress on Challenging (anything below challenging has the AI gimped to various degrees) you’re basically playing me. As some of you know, Fallen Enchantress (like GalCiv but unlike WOM) will make use of your multi-core processor. Every AI player gets their own thread. Long story short, I can do some terrible, evil things with the AI.  But I know there are players who are just far better at this game than I am.  Please feel free to make posts discussing your strategies. I am not ashamed to steal from you.

(7) If you have not already voted, please please vote in the journal poll: https://www.elementalgame.com/journals We use this data.

(8) Modding time is almost here. We have tried to make it hard to mod so far but the time to turn off the network data stuff is nearing.  Here is what I’m thinking: http://screencast.com/t/5IyRz7XY.

(9) Before anyone asks, no, you can’t transfer your FE serial to Steam. I can’t go into the details on why this is so don’t ask. Just assume it has something to do with gold plated rocket cars or something.

(10) The Fallen Enchantress budget is 2.2X the budget of War of Magic.  We hope people like what we’ve been doing here. I know it’s been a long journey but it was important to us that our most loyal customers, you guys, knew that we were dedicated to making sure our fantasy strategy game was nothing short of awesome.  Beta 4A has a lot of nice things but I think you guys will be surprised how much we were holding back for Beta 5 (for testing purposes mind you).

(11) I can’t tell you who the Fallen Enchantress is. But you can probably guess.

(12) The campaign, which isn’t in the beta (for spoiler reasons) was designed by Jon Shafer and written by fantasy author Dave Stern. It plays quite a bit differently from the sand box game. The idea was to give players an idea of what could be done via mods as well as give players a fun campaign experience that wasn’t just a bunch of sandbox scenarios.  I do want to emphasize that the campaign is made with the same tools players will be given and they will be able to make their own and share them.

(13) While Fallen Enchantress will be available on Steam, it won’t require it.

(14) If you don’t have War of Magic, skip it.  We’re going to discontinue it (we’ll still support it for existing customers for the long haul and may put out another update later this year). Fallen Enchantress is a lot closer to what we had in mind.

(15) If you have Windows XP 32-bit, you can get better performance if you enable large address awareness.