Who can ever forget the epic battle shown at the beginning of The Fellowship of the Ring?  Sauron the Maiar was able to wipe out hosts of men and elves in a single swing.  So terrible and powerful was he that he single handedly kept the armies of the last alliance at bay.

There is a balance. Because what most people don’t realize is that the power of Sauron seemed great only in relation to his foes.  Some time in the past, the host of Numenor – mortal men – no elves, so overwhelmed Sauron and his allies – when Sauron was at his peek, that they were able to take him prisoner (this didn’t end well for Numenor in the long run).

A single elf nearly crippled Morgoth in single combat. Morgoth is to Sauron what Sauron is to Aragorn. Morgoth was a Valar, an entire order beyond what Sauron was. Practically a god.

The point being is that you don’t have to cripple the champions to make the soldiers you train relatively powerful.  The challenge is balance. And it is, to be certain, a significant challenge. 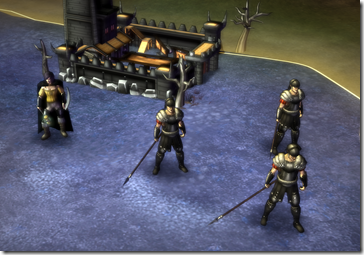 In the world of Elemental…

In the picture above, on the left, is Resana. She is the Empress of Krax. A Level 6 Channeler. She is quite mighty but only a wisp of what she will become later.  Next to her is a party of Krax Legionaires.  In Beta 5-B, they take 8 seasons to train (in Beta 5-A, the current public one, they’d take 17 turns to train).  In 1 on 1 combat, Resana would win unless the Legionaires got lucky in combat (critical hits).  But if there were two parties of them, she’d lose.

What made training units unpleasant was that unless they were total junk, they took a long time to train. The equipment and skills were simply adding far too much training time. Why bother researching all this great tech if you couldn’t build it? So a considerable amount of time was spent relooking at how much equipment and traits should cost.

Another big change has to do with loot.  This is something we will be working more on. But in previous betas, it was common (literally) to find high end weapons very quickly – just laying around.

What we are moving towards, instead, is where you find cool loot early on but it’s not nearly as over powering. Your sovereign and champions start out with fairly low grade weapons (8 attack).  It’s a bit de-balancing to simply luck out and find a 12 attack +4 speed weapon.  That’s a 50% increase in raw damage not to mention a 25% improvement in initiative.

So instead, Resana finds interesting weapons with trade-offs. A Iron War Hammer that does 12 attack (yay) but weighs a lot (slowing her down) and lowers her initiative.  It makes her tougher in battle (she is doing more damage after all) but it also means she’d need troops to keep herself from getting swarmed. That’s just one example.

Powerful, rare weapons are out there still. But they have to be earned. You won’t just turn over some lost cargo and find a magic broad sword anymore.

The other change we made has to do with hit points.  Previously, units gained 4 hit points per level.  So by level 10, that’s an additional 40 HP. It doesn’t take long before the trained units become almost irrelevant to the battle because that level 10 champion would have 60 HIP while that newly trained unit might half less than half of that.

We do want players who have invested in their champions to be able to win epic battles, single handedly. However, we also want players who invest in building an empire to be able to achieve victory equally effectively.  In the early betas, the champions were considered to weak. The pendulum has swung too far the other way.  Beta 5-B will be our first pass at bringing balance to this conflict.