Overall, we’re pretty happy with how Elemental: Fallen Enchantress turned out. It’s sold pretty well and it’s looking like it’s going to end up with an average review score of about 4 out of 5.

Obviously, there’s always room to improve. And that’s where Legendary Heroes comes in.  This expansion pack is a top-to-bottom revisit of Fallen Enchantress. We’ll have a full change list up soon (and it’s many pages long) but here are some of the highlights told in screenshot form.

In Fallen Enchantress, your ability to acquire champions (which led to your victory or defeat often times) was dependent on how the map placed the champions at the start of the game. You literally would find them camping out in the wilds.  This had the tendency of making victory less about how powerful your civilization was and more about amassing champions. In fact, some players were able to win the game without ever building cities. 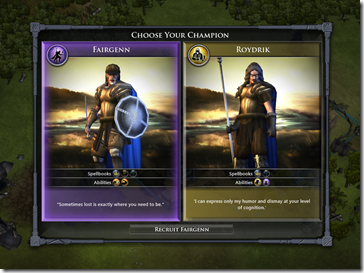 In Legendary Heroes, champions are earned through the fame your civilization has generated. This is done through the city improvements you build, completed quests and monster lairs that get cleared. 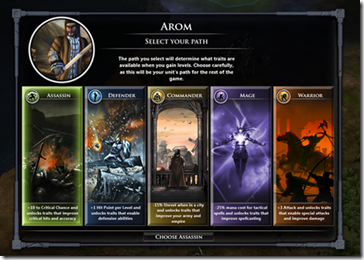 There’s 5 paths a champion can take.  A new one, Commander, replaces the governor (and it hasn’t been fleshed out for beta 1 yet). 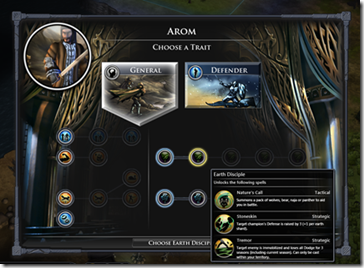 In addition, rather than a randomly selected list of traits being available on level up, players can now choose a pre-set path. This lets players focus on their strategy towards victory rather than hoping that they get lucky with the random number generator. 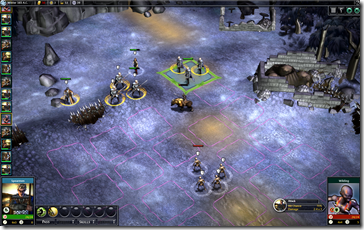 Be warned, beta 1 only has a smattering of these new maps. Don’t judge the final game (which is still months away) based on the variety. Our focus has been to nail down a few and then expand from there.  The overall goal is to make it so that melee units get into the battle pretty quickly and that ranged units are placed in the rear.

The idea being that if you have only ranged units, you’re going to get slaughtered if you don’t have units protecting them. It also means that initiative matters a lot more because contact will often (but not always) be made on the first map.

The maps are much more varied (and will get more so as time goes on). 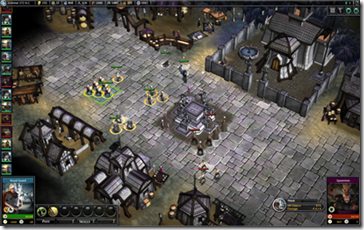 Conquering cities now means fighting it out in the streets 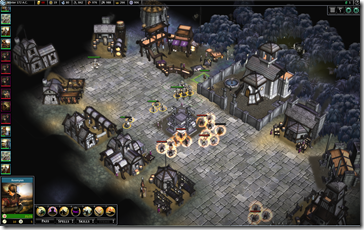 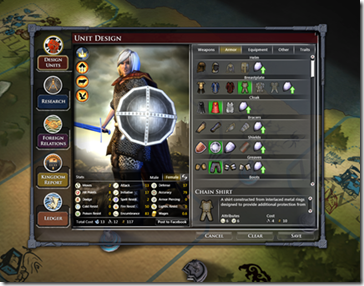 We’ve reduced the number of variables on weapons and instead gave them special abilities in tactical battles. So we’ve done away with pierce vs. cutting vs. slashing because, as a practical matter, they don’t really make the difference between life and death in battle.

By contrast, a spear being able to impale multiple units with 1 hit and having multiple units swarm another unit does matter.  One thing on swarm, if a unit is surrounded by enemies, then when one of them strikes, the other strike too. But the effect is that the target enemy’s defense is lowered (the other units are, in effect, distracting it) as opposed to having other units getting an extra whack at them.

The Graphics are just plain better 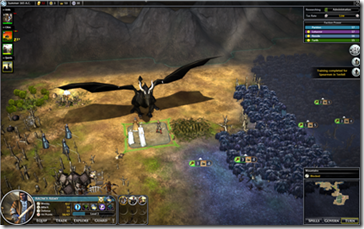 I know some people have said that they don’t care about graphics. But the fact is, graphics matter. They sure do to me.  I won’t give up game play for graphics but in the picture above, in FE, that dragon would have no shadow and it really takes some people (like me) out of the experience. 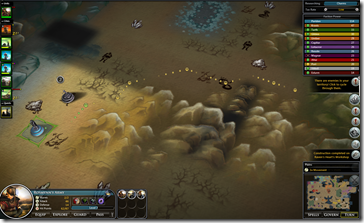 This one screenshot shows a number of things at once.

First, units now get a preview of their path before moving. Just mouse over where you want to go and a path will show up with how many moves it takes.

Second, the button button is now yellow if you have an idle city or units with moves left. We don’t force you to deal with all those things but you now have the choice.

Third, your relations with other players is now displayed at all times in the power list (see the smiley or frowny faces next to tehir names). 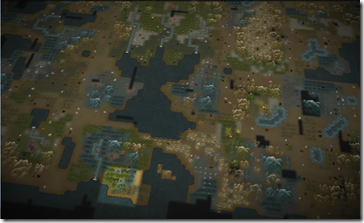 This screenshot doesn’t really do it justice. I finally did the math and huge is about 50% bigger than large. So it’s pretty big.  Now, if you’re running 32-bit, we’re going to see how the beta goes. In the game pictured here, a 32-bit machine would have run out of memory.  There’s nothing more we can do about that.  This is a game that has thousands of units, each with their own unique equipment and that is, unfortunately, expensive.  But we want to hear from 32-bit players directly on what they experience on it. 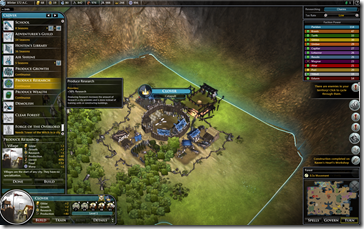 There’s no longer any reason to ever have a city idle (which is why it’s tempting to force players to assign a city to do something before ending the turn, we’ll see what the beta testers say). Technologies will let players access “Ongoing projects” which let them produce growth or research or wealth.

And lots and lots of other stuff

We also added a bunch of new monsters (skeletons, liches, brood hunters, to name a few). New quests. New Spells. Lots of new special abilities. And on and on.

Not too shabby for twenty bucks.

The first beta is expected this Thursday. No promises though.  Just remember, IT IS A BETA. We have a lot of additional content coming in over the next month or so.

We expect to finish in May.