Just got back from New York on the Atari auction.

Being an inappropriate and embarrassing person, I naturally took pictures of the location as it was just plain amazing.

Here are some pictures from the auction. 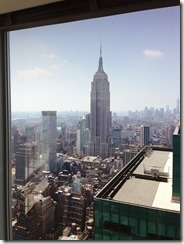 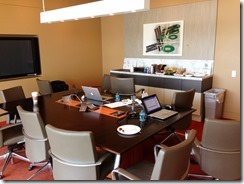 Each bidder was given a conference room where they could work out the purchase agreements with Atari and the investment bankers as well as just spend time working between the auctions. 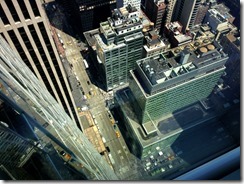 This was taken at the back of the auction room.

This is the skyline.

I won’t say in this post who won the various auctions as I don’t want to step on someone else’s announcement.  I will tell you how the auctions went.

Typically (except in the case of Battlezone and Moonbase Commander) the bidders are placed together in a room. Each bidder is assigned a bid order in a given round.  Each round, the bidder can agree to raise their bid $20,000 over the previous bidder or choose to pass. If they choose to pass, they’re out of the bidding and it continues.

The head of Stardock Entertainment (Derek Paxton aka Kael) did the bidding on one of the items were were interested in and I bid in a later auction on a different item.

We went there to get two items in particular. One in particular we really really wanted because we are insane fans of the series.  That one we got.  The other we wanted we didn’t get, we were the second highest bidder.

I imagine there will be announcements next week by the new IP holders to whom I congratulate.  It’ll be good to see these awesome games brought back in one form or other.