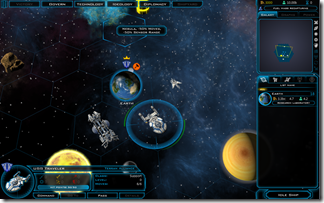 The ALPHA of Galactic Civilizations III is due in 17 days (March 27). I want to use this post as a way to set people’s expectations and, if anything, use this as a public service announcement that you should NOT join the Founder’s program if your goal is to play a video game for fun early. That is not the purpose of the Founder’s program.

The stages of development

Software goes through 5 distinct phases with varying definitions but below is my own personal version:

This is where you have something that kind of sort of works. It may not work anywhere else but your machine and only the most rudimentary features are in.  Right now, Stardock has 6 games in prototype of which only 2 have been vaguely mentioned – GalCiv III and Code-named Mars.  Most non-insane studios do not talk about games until they are way beyond this point.

The purpose of the prototype is work through basic systems and set up the art pipeline.

This is where the game will probably work on other people’s computers but it’s nothing that would remotely resemble a “fun” experience.  The fact it works at all is a miracle and only the most basic features are working. Internally this stage means the art pipeline is now working (that is, you can get new art assets into the game) and the underlying engine is functioning.   In my mind, the threshold that makes something an alpha is that it is possible to win (or lose) the game. That doesn’t mean it’s fun.  Most of the features won’t be in.  The purpose of the alpha is to see if the engine works on other machines and start solicitation core game mechanic feedback from members.

Many studios these days have open betas. Betas tend to have most of their major features in and some gameplay in.  How “fun” it is depends on how far along the process they are. Think of your favorite game and change a few variables about it and suddenly it’s not fun.  Civilization IV becomes a lot different if it takes 50 turns to spit out a settler. Call of Duty is a totally different game if everyone has 1000 HP.  You can’t judge what the final game will be like.  But at least now it’s a game.

At this stage, it’s a release candidate. You’re not really adding anything anymore. You just want to see if there are any bug issues that got missed.  Some games are reviewed at this phase even because you can pass judgment at this stage.

The game is out and will be judged.

In 20 years of game development, I’ve only shared alphas with the public one other time and that was with the original Galactic Civilizations for OS/2. It was extremely primitive.

Obviously, our biggest concern is that we’ll have people making judgments on the game itself at this stage.  We’re over a year away from release.  The opportunity here is to see how well the game runs for people but also to hear what long time GalCiv players think of different parts of the game.

The alpha  phase is the opportunity to experiment and try out different ideas. In this alpha, we’re trying out new things such as a new type of technology tree, a single planetary manufacturing queue, a new UI for the planet screen, etc.  Maybe these things will say. Maybe they won’t. That’s what the alpha will help us decide.  That is the point of it.

So to emphasize the point again: Do not play the alpha expecting to have a fun game (though, ironically, the 1 on 1 multiplayer might have some bit of fun based on the playtesting I’ve seen).  But do play it with an open mind to see what things you like, how well it works on your box, what things you think should be changed and share those things with us after giving your own concepts serious consideration.