This Thursday (October 30th) we plant o have an opt-in beta which is basically a preview of Beta 2 (not quite done but getting there).

This is what will be in there:

Minor factions in Sorcerer King interact with you purely from conversations.  It’s not a trade screen ala GalCiv, FE, Civilization, etc.  Instead, each one has specific things they can do for you (and to you) and gaining their favor requires doing specific things based on which minor faction they are.

Between now and release, the minors will get much more fleshed out.  We’re just putting in the skeleton of this system for Beta 2.  You will need their help to win (or at least, you’ll need them to not side with the Sorcerer King).

The guardian sovereign is the master of terraforming the world.  She can raise and lower the land as needed.  If you need to wall yourself off (or protect shards by surrounding them with mountains) you can do that.  If you’ve ever played Populous, you will get an idea of what we’re going for here with the Guardian.

We are really hoping that the Kumquat 3 engine we’re using that supports morphable terrain will differentiate Sorcerer King from other 4X games (such as Fallen Enchantress).  We will be very interested in hearing the ideas of other players on other interesting things we can do here (and we’ll want it to come from people playing the game and not theory craft <g>).

The Tyrant is modeled after Saruman. He’s envious of the Sorcerer King and fancies himself taking his place.  The Tyrant can destroy shards and absorb their magic. He too can cast the spell of making.  In a way, he’s in a race with the Sorcerer King to accumulate the power to destroy the world for his own ends.

Lots and Lots of updates

We got a lot of good feedback from Beta 1 and began implementing it here.

For example, if the Sorcerer King won, why is the land relatively clear of his presence? Well, in Beta 2, he has garrisons around the map and strongholds start peppered around the map from turn 1. These strongholds train units, build improvements (different ones from you) and look to get even more land.

They also spread the Shadow lands – land that has been corrupted.

Shadowlands are utterly ruined but, for players who have enchantment books, they can be converted into fertile lands and be built on by the player.

We also have Thralls in.  As the Sorcerer King becomes more powerful, more and more of your citizens fall under his sway.  Thralls are basically the same as units you build except, they don’t’ do anything.   The cure for that is hope which can only be found through the sovereign’s skill tree (i.e. there isn’t a “hope building” here).

What we want to do with Sorcerer King is provide a clean slate to build on.  That is, we imagine releasing Sorcerer King early next year and then having yearly expansions based on player feedback until people don’t want them anymore.  This means Sorcerer King itself needs to be a fun, tight, innovative experience.

Right now, I can think of two excellent fantasy 4X games on the market that player can choose from – Endless Legends and Age of Wonders 3.  We don’t want Sorcerer King to take away sales from these excellent titles so we want it to provide enough distinction that it’s not competing.  This means we have our work cut out for us. 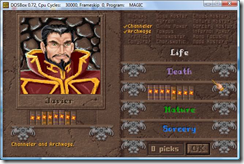 Frankfurter and others have made a lot of outstanding suggestions on how the crafting system in Sorcerer King might be extended. What’s ironic, is that we already have a crazy powerful crafting system…in XML.    If you open up coreitems.xml you ‘ll see that items have Game Modifiers on them.  This is a techie way of calling them enchantments.  We just never created a UI for them.

We have been frustrated with the current crafting system in that it’s basically just a store with ingredients as currency.  I don’t like it.

So this is what we are looking to add to it:

Recipes provide the means to both create items and enhance them.

You are vastly outnumbered

Your stack of doom, however, will be going up against a very smart opponent.  That is, I’m going to be personally coding the Sorcerer King’s units actions in tactical.  It’s not going to be dice rolling here.  I’m going to be looking at what you got and trying to counter you actively. You will need to look at what spells the Sorcerer King has gotten (this will be in Beta 2) and be careful not to run afoul of them.

Obviously the different sovereigns have different units and their own unique skill tree (our tech tree equivalent).  The goal here will be to make each type of player very distinct.

Over the course of the game you’re going to run into a lot of quests that are where you get a lot of your special items, crafting ingredients, special units, etc.  But you will also be making choices that will determine what kind of character you are (ala Ultima IV).  So at the end of the game, when you meet the Sorcerer King, he will, in effect, be a mirror image of what you are.

Right now, the end battle is the same no matter what.  But as we go forward, the Sorcerer King will be the anti-you.  You won’t be selecting a specific Sorcerer King at the start of the battle but when you do reach him, you will be presented with a general summary of the way you’ve played that particular game and the particular consequences that will ensue as a result.

For Sorcerer King to succeed at the level we want, we need to make sure it is truly unique. That is really stands out.

Below are the 5 areas we are trying to focus on to do that:

So Beta 2 is still due in early November. But the Opt-In beta is this Thursday. Obviously there’s still a lot to do between now and then but hopefully this starts to show you where we’re going.