For Sunday I spent the day doing lots of various little things.  I’m not sure where to even start.  One thing I can say is that we still have a long way to go. Not just in terms of bugs but just balance and feel.

The mid-game has a death-lull in it.  That is, where you’re well into the game, you think you have a pretty good handle on things but there’s nothing exciting happening.

In a traditional 4X game, this is where diplomacy/world council type mechanics come into play.  That is, you’re having to make sure your primary objective isn’t derailed by other forces (people ganging up on you, someone building a nuclear weapon, someone gaining control of the United Planets/United Nations, having your technology obsoleted, etc.).

Sorcerer King doesn’t address the death lull yet.  As enjoyable as it is to research new spells, leveling up heroes, crafting items and such, it is a very linear progression.  There is nothing forcing me (or encouraging me) to put resources and effort into a secondary direction.

In Sorcerer King, this is where the Dungeon Master comes in.  However, as a player, I’d like to see more levers for the player to control how the Dungeon Master is going to affect the world (i.e. I don’t want it all quest based).

The tactical maps are getting more and more interesting as the sovereign spells come in. 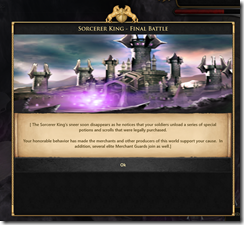 Painful programmer art but the end game is very different based on your previous choices.