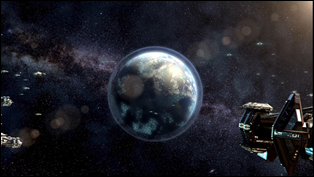 Yesterday was the long-waited big update to Galactic Civilizations III.  Version 1.4 added many many AI and UI updates to the game based on months of player feedback.

We’re pretty happy with the response overall.  But there is one change I’d like to discuss with you guys: THE WHEEL.

I’m Brad Wardell. I wrote the original GalCiv for OS/2 and much of GalCiv I and GalCiv II.  I also designed those games and wrote their AIs.  On GalCiv III I’ve been more of an executive consultant thus far as I’ve been focusing on Ashes of the Singularity for the past couple of years.  But GalCiv remains my baby. I’ve spent over 20 years with it. So it matters a lot to me.

In GalCiv III 1.0 through 1.3 players could go to the planetary governor and override the global spending priorities on a planetary basis.  This made micro-managers very happy and people who don’t like to micro manage very sad.

I am in the camp of hating it. HATING it.  Not because of the micromanagement because it completely violates what GalCiv has always been about: You are running a galactic civilization.  It’s supposed to be half simulation, half strategy game.  The wheel is totally gamey.  No civilization functions where last being can be assigned a job by the government.

I have tried to stay reasonably hands off on GalCiv III but the planetary wheel had to go.  I wanted it out for 1.1, then 1.2, then 1.3 but other things took priority and it was finally killed in 1.4.

It has NOTHING to do with the AI

I read the forums and I see people talking about the change being made to make the AI easier.  That’s a ridiculous argument. Not to be mean but only a non-programmer would say that.  Micro-managing is what AIs do best.  I could write up an AI that could tweak planetary wheels every turn to a level that would make most micro managers weep.

Put another way: computers are faster and better at math than humans and the planetary wheel was all about math.

The reason the AI didn’t use the planetary wheel in previous versions is because it was supposed to be eliminated long ago.  So there was no point writing AI for this if the feature was going to go away.

It is my game but it is also YOUR game

Now, that said, I write games for you guys. That’s what motivates me.  I see people who really liked the planetary wheel.  So we need some sort of solution that will make both groups happy.

What I’m going to ask is that a prefs.ini setting called planetarywheel=on be added.  If that’s on, you’ll get your wheel.  However, that won’t be the official version of the game. There will be no in-game UI option to turn it on.  People who are passionate about this feature can still turn it on without everyone else feeling like they have to use this feature in order to micro-manage their empire to the nth degree.

I know that solution won’t make everyone happy. No solution will.  But hopefully this will be a reasonable compromise for most people.