The goal: Create the biggest scale real-time strategy game ever 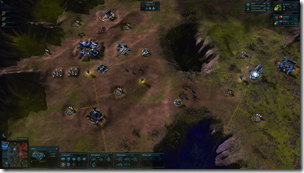 Ashes of the Singularity is a real-time strategy game set in the not-so-distant future where a single person can control thousands of constructs (the distant descendants of today’s drones) in order to conquer an entire world.

The world is broken up into regions with each region containing various resources that players capture and can then build up defenses, exploit the resources within and use as a staging area to conquer more of the world.

On the one hand, we want players to get a sense of the epic scale of these maps and see vast armies battling it out without turning them all into icons.  On the other hand, we want players to be engaged with the world so we’ve resisted getting too abstract with how we display everything.  Every unit in Ashes is unique with a specific role whose differences can be subtle. Hence, if we got too abstract, it becomes impossible to recognize the interplay between different unit mixes. One of the strengths of using Oxide’s Nitrous engine is that we can zoom way way out without hiding or abstracting units.  The downside is, of course, you zoom out enough and everything looks like “little tiny ants”

The other big challenge has been hardware requirements: Ashes of the Singularity v1.0 requires a video card with 2GB of video memory and a 4-core CPU with a display of 1920x1080 and 4GB of video memory.

According to the Steam hardware survey these requirements have consequences for us.

To put it in perspective, Ashes sales are at the top of the RTS charts for new 2016 releases despite not having a well known IP and costing $39.99.

Still, a goal of ours is to reduce the hardware requirements. That’s where version 1.3 comes in. 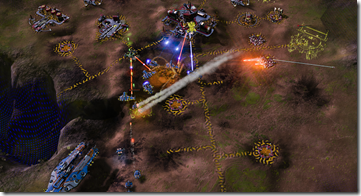 On August 4 Ashes 1.3 was released and we are on the edge of being able to reduce the hardware requirements to  1GB of memory and a 2-core CPU.  We’re not there yet but we’re getting pretty close.  The one area we really need to work on is the minimum display resolution which is tricky given how generous we were in our UI design (generous to ourselves that is).

Some highlights of 1.3 include:

It’s a pretty meaty update, particularly under the hood.  Someone who bought Ashes of the Singularity in May who hasn’t played it since and downloaded version 1.3 would discover that Ashes is a lot faster, a lot smarter, a lot prettier and has a much better campaign.  Too late for reviews but important for rewarding early adopters and fans.

Season 1 is over and the winners are: 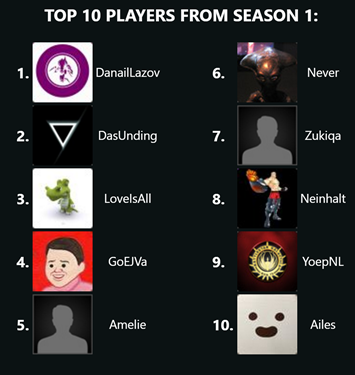 The ranked multiplayer in Ashes is similar to that of Hearthstone which probably isn’t surprising since it was designed by Adrian Luff who joined us after having been an architect of Battle.net for twenty years. Of the top 10 players, 6 players were Substrate and 4 were PHC.

You can explore the Metaverse by going here: https://www.ashesofthesingularity.com/metaverse. This site also includes the DirectX 11/12 hardware performance results.

Despite Ashes having a pretty lively multiplayer community, over 95% of the player base only plays single player.  As in, they have never attempted to play multiplayer.  This is important for fans to understand because we often see people wanting us to spend more time on multiplayer features (something we tend to want to do because we play multiplayer).

So often we have to make tough decisions on whether to put engineering time into features to help multiplayer or engineering time to support modding (we think a lot of people would love to make their own units or just share scenarios and maps with one another via Steamworks).

For that reason, modding and sharing mods will make up a lot of our upcoming engineering time.  We want people to be able to make maps, units, scenarios, UI changes, buildings, terrain, etc. and share it easily withy one another.

We also plan to allow people with the base game and the expansion (despite being different products) to be able to play together in multiplayer.  We don’t want to split the community and it gives us an opportunity, over time, to make the base game of Ashes of the Singularity a good introduction.

We’ll be announcing the expansion soon but in the meantime, here are some general details:

There are a ton of other features as well but those features will be added to the base game as well for free.

The base price for the expandalone will be $39.99.  For a limited time, the upgrade price for existing players will be $14.99.