If you are like me you are probably the guy that people call for help on their computer.  Recently, I discovered the Intel Device Advisor. 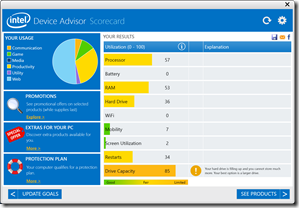 It’s as brilliant in its concept as it is straight-forward in its implementation.

Here’s how it works:

You download it and run it.  It stays in the background for a long while (as in, days).  It then reports to you, based on your uses, things you might need and where you can get them.  This is something Windows should, frankly, come with.  It’s still relatively early in its development – not on the tech side but on the offerings side. But for example,  imagine if a relative is complaining that they’re always running out of disk space.  This app, itself, won’t fix that.  But instead, would promote a series of disk space optimizers (hint, hint, Intel <g>) or alternatively detect that your motherboard has an M.2 slot and recommend a compatible M.2 drive that even casual users can probably handle putting in (terrible name, M.2, it’s basically a tiny little drive you plug into the motherboard).

Where it really shines though is handling the #1 question I get asked: What should I get for my next computer?  This app will literally configure one for them from various third parties for them. It seems almost like magic. Seeing iBuyPower and Asus with really specific configurations on an Intel page is a bit surreal.

This app is still early but I am pretty excited that Intel’s hardware knowledge paired with third party vendors could make dealing with the giant PC ecosystem a lot easier.