I got GalCiv III to run on my Surface Pro 4 by manually updating the video drivers to the latest ones by Intel.  The official drivers from Microsoft are a year old and those drivers claimed to be DirectX 11 capable drivers (they were not) and so the game would crash when trying to do a DirectX 11 specific call.

If you have an embedded Intel video adapter, do yourself a favor and head over to Intel's site and download the drivers.  I had to download the ZIP file and then extract it and then manually install the driver as it isn't digitally signed.

The biggest issue I have with my Surface Pro 4 is that it throttles. Badly. It would play GalCiv III like a champ if it weren't running at 860Mhz.

There is no perfect balance because what is balanced is in the eye of the beholder.  That said, we are looking at adding more options (such as disabling espionage) to allow players to customize their game experience further.

Population is going to be tweaked so that 1 point of population = 1 raw production. This will require some balance changes on morale and farms and such but this is the most elegant way to make population be more powerful.  Planets will tend to start with 1 population.

Tourism will eventually be tied to your cultural influence. We are starting to keep track of how many tiles you control and how many are congruent to your capital world.

Minor races are going to be getting friskier in the future (as in, provide opportunities for early game limited wars).

AI generated offers are awesome when relations are decent. 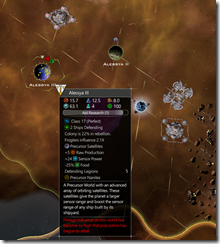 Cultural conquest is coming along nicely.

Right now, much of our work is on polishing the UI, making quality of life fixes and fixing bugs that we get reported.  We are also trying to make modding a lot easier so that people can enable subscribe and unsubscribe from mods more easily. 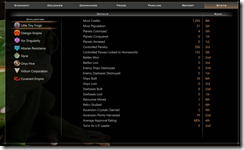 Your Civ's racial abilities will show up on the stats screen

The AI is something we continually update as we get new saved games from players and just play test over and over again.  Each time we play, we see something that we think can be improved on.

I'm in the debugger now.  So more to come.