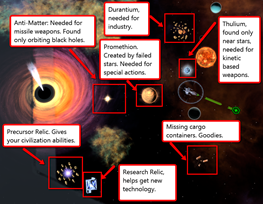 Summer continues.  Unless you're in Australia or New Zealand. But they're not people. Not really.  I mean, they can't feel heat and cold.  So what's been up? The boring job of architecture update.  We've been spending the past month fixing architectural issues that have slowly built up. This shines through in the form of bug fixes.  It's slow, time consuming but important work.

We are also working on merging the GalCiv III base game and Crusade core together.  The net effect is that late this Summer, there will be a massive update to GalCiv III (v2.5) that will bring some of the elements of Crusade over to it.  This will mostly be seen as a major improvement in balance, stability, AI, diplomacy, memory use and performance.

The next DLC: The Dread Lords

This Fall we hope to release the Dread Lords DLC.  This will be accompanied by a number of new features into the game itself (which doesn't require anyone to buy the DLC to benefit from).

I'm happy to report that the latest GalCiv III does work on the Surface Pro 4.  We are working hard to try to reduce the hardware requirements further and increase performance.  That's why you haven't seen a lot of gameplay updates recently.  Making the game run faster and more stable and improve the multiplayer experience (we are close to custom races in multiplayer) is very important.

Speaking of multiplayer.  While very few people play multiplayer, supporting it has a benefit to single player users.  It forces the engine development to be much more disciplined.  So players end up with a much better experience.  In the long-run, we want to make GalCiv III have not just good multiplayer but so compelling of a multiplayer experience that people will want to play it that way.  This will mean adding some new modes to the game (that will work in single player as well) to allow for much shorter games.

It's far too early to start talking about the next expansion.  What I can say it that it will focus heavily on politics and government.

One area that Stardock is actively hiring for are C# developers.  Doesn't even have to be full-time.  It's more like we will pay for various tools that we can share with the community.  We are going to be releasing a Flavor Text Editor shortly as well as a Mega Event editor.

It may come as a shock but GalCiv III has supported full-blown quests (as in, extremely sophisticated quests and stories and linked events) since 1.0.  However, there is no tool to create them. You current have to edit XML files in a text editor which is very tedious and time consuming.

Thus, we are looking for:

and that's just off the top of my head.  These kinds of editors are basically glorified XML editors since the output is just XML.  But imagine what effect it would have if people could create and share their own campaigns and events.

Now, before anyone starts emailing me or PMing me, bare in mind, one of the reasons we haven't done this is because we don't really have time to walk people through the various XML files and their corresponding .XSD files.  So the short answer is, you make the thing, we will be happy to pay for it if we can use it (and you can even make a prototype that just needs polish and we'll pay and pay more for the polish).

Just look at the XML files and the XSD files and you'll see just how powerful the system is.

So next month, get ready for GalCiv III v2.5!