Every once in awhile, Do a 1 on 1 test on a relatively balanced map to see how well the AI is doing.   I play on Normal or Gifted as that puts the AI on roughly equal terms with me.

I choose  the Drengin because they are a vicious, evil civilization that has few redeeming qualities and they play the game very differently than most people do (they are absolutely amoral).  Their strategies aren't always ideal but they do tend to be interesting. 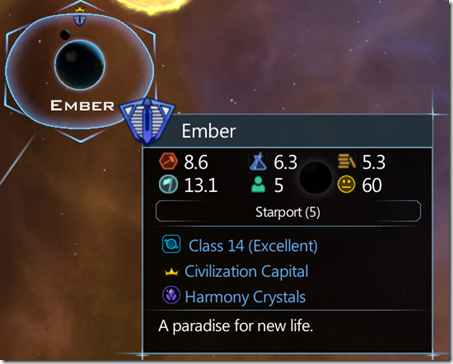 Both humans and Drengin start with a class 14 world (a very nice planet) as well as two habitable nearby worlds.

The base game really reward rapid expansion.  I'm playing Crusade which rewards fewer, well developed worlds.  This is hard on the AI because the AI is good at rapid expansion and less so at optimizing its worlds which is one reason I enjoy working on Crusade so much, I like hard AI tasks. 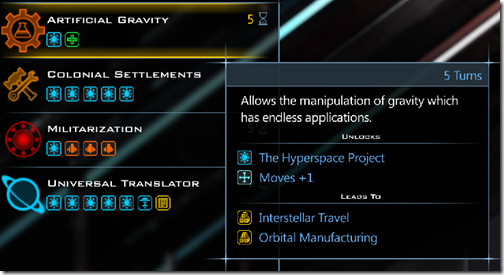 I choose Artificial gravity first because it increases my moves by +1. 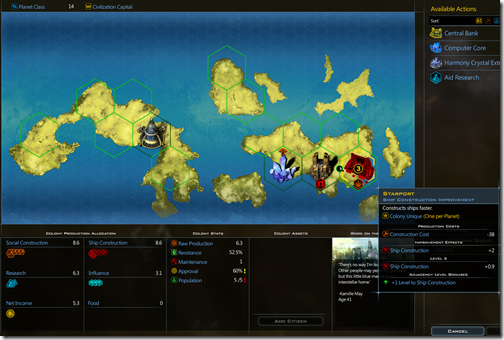 For my home planet, I rush build the Space Elevator, then the shipyard and then the Starport.

A lot of people rush to the shipyard which I think can be a mistake.  GalCiv games are somewhat different than most 4X games in that players start with a lot of "gold" in order to jump start their opening strategy.  This is why you frequently see new players claim the game is cheating -- if you don't know you're supposed to rush build something at the start of the game, you'll fall behind.  In my case, by rush building structures and waiting a turn for them to build, I greatly reduce the rush costs of subsequent things because they are already partially built.

Not rush building too much at the start also lets me take advantage of special resources I find on new worlds: 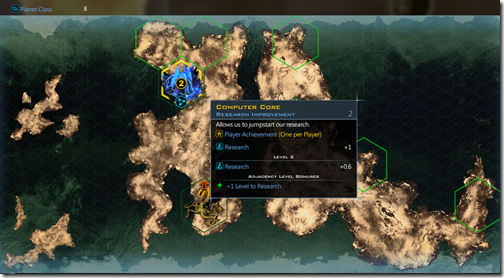 Level 2 computer core rush built gives me a huge research boon right away.  This is on the planet Roscommon, my second planet. 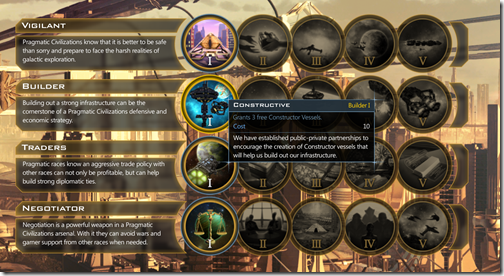 For my first ethical choice I went pragmatic and then made constructive my ideological choice which grants me 3 Constructor ships. 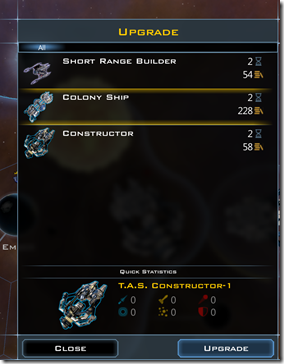 I then upgrade one of them into colony ships (again, because I didn't use all my rush money). With the other two Constructors, I send them to claim resources: 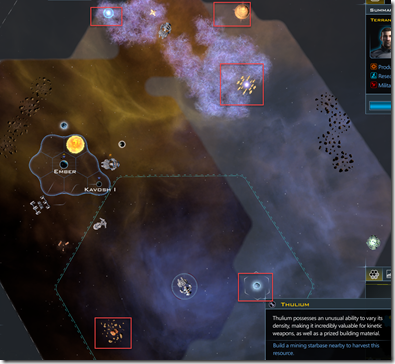 Now you could argue this is pretty unfair to the AI.  The AI is never going to have this specific of a strategy since it's not scripted but instead is reactive.  But I am not here to play fair. I'm here to win. 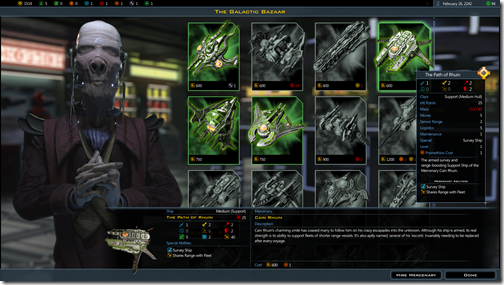 When I find the galactic Bazaar I immediately hire a Survey ship now that "The Anvil" is super expensive. 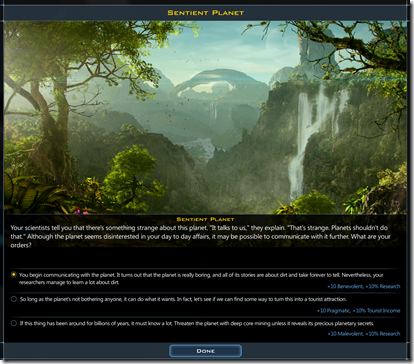 This time, I choose a benevolent path for my moral quandary. 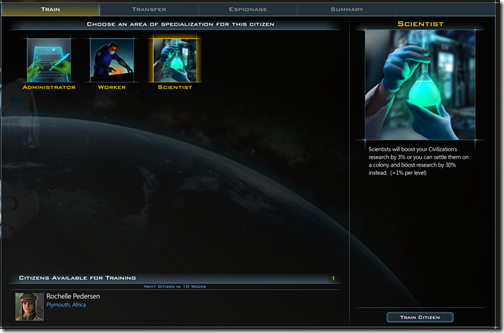 For my first citizen I choose a scientist rather than an Administrator.  That is because I plan to win this quickly. 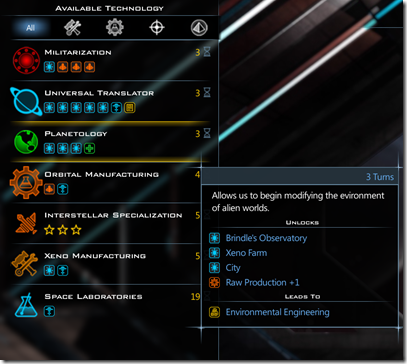 Now, I want Planetology because I want to get farms going.  Now that population produces raw production at a 1 to 1 ratio, cities matter a lot and cities require food. 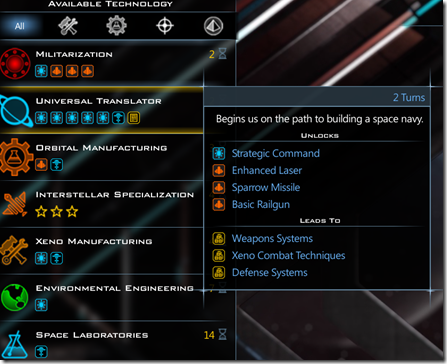 Now it's time to b-line to Planetary Invasion to quickly end this.

With my enlightened (benevolent) choices on colonizing, I gain an ideological point that I put into educated which gives me 150 research points which fast-tracks me to invasion.

On turn 22, I have planetary invasion.

Now to destroy the Drengin Empire.

Step 1, bomber fleet with a scout to increase my sensor range. 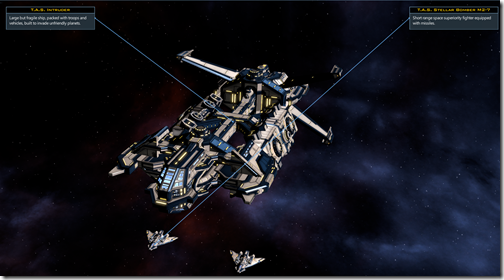 Step 2, built transport with "5 legions of my best troops!" 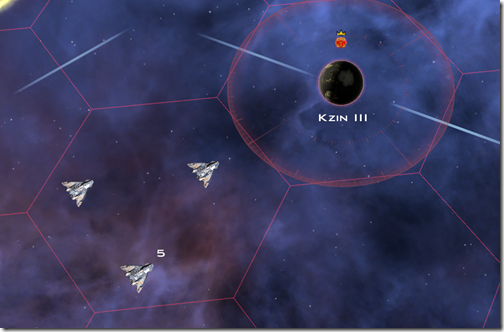 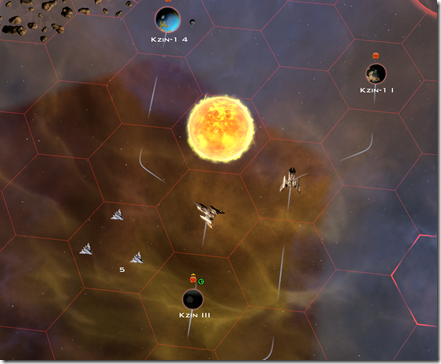 Now, the Drengin are quick to react.  They build up a decent little defense.  However, they spread themselves out by reinforcing individual planets (making it harder to invade).  One might argue they should have created a single fleet to challenge mine.  However, doing that would have made their planets even more open to invasion.  They are hoping they have time to build up before invasion comes.  But they're wrong, they are already out of time. 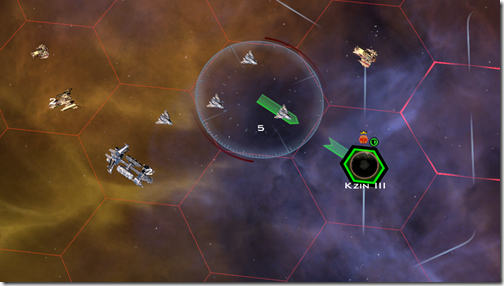 Ok, this IS unexpected.  The Drengin form a fleet big enough to take out my transport.  Sadly, they just don't quite have enough moves left to attack. 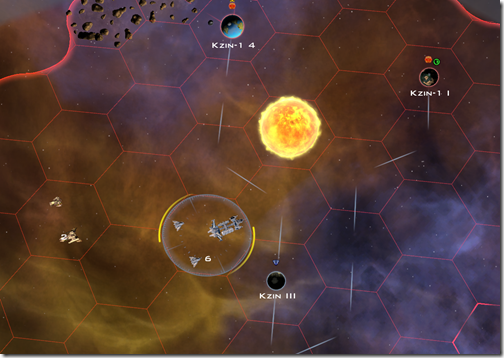 Not taking any chances, I form up a bigger fleet and take their first planet. 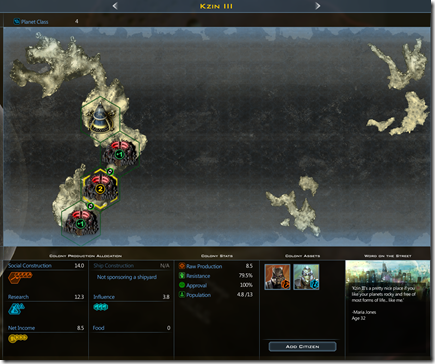 Any time you conquer a Drengin world you can pretty much assume there will be slaves. This planet has a lot of slaves. 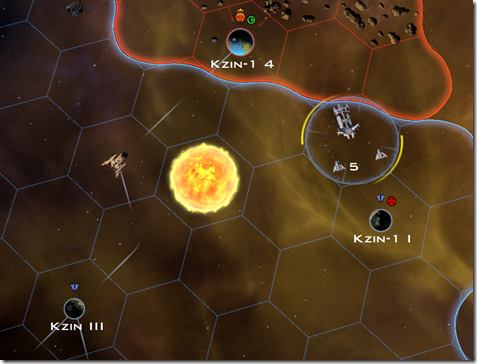 They're down to the last world. 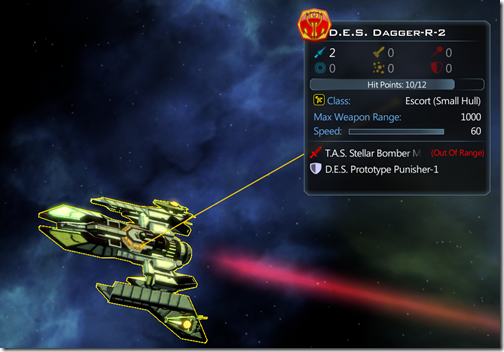 In the battle in orbit of their last world the Drengin have made some interesting strategic choices.

First, they researched Small Hulls.  I just got that tech so none of my ships are as big as this ship.  Second, he has a relatively advanced beam weapon which will out range anything I have since I'm using "space rockets" (because I rushed right towards conquest and put the base weapons on).

Meanwhile, the other Drengin ship shot past my ships and attacked my lightly armored Transport. Destroying it. 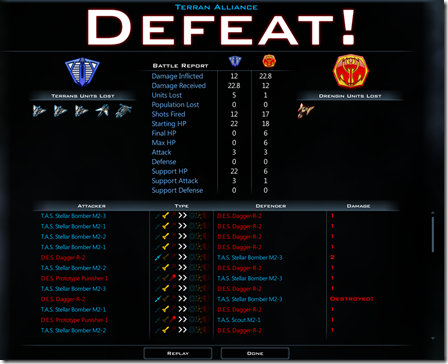 So an unexpected setback.

They're still doomed but it's not quite the walk over I had planned.  Just means I will have to build another rush force.  But I now have 8 planets to their 1. 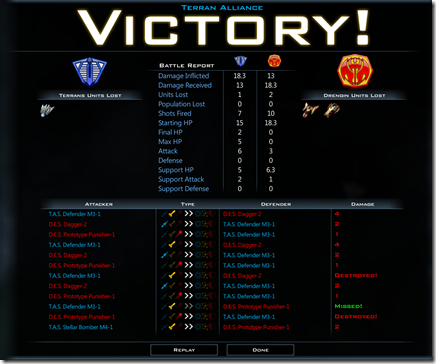 My next fleet takes out their defenses. 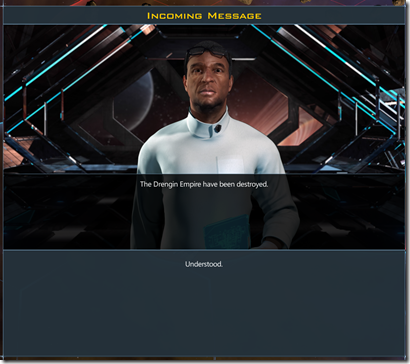 And then the invasion begins.

So was this fair?

No.  Of course not.  There was never any question of the AI being able to win.  You take two humans, give them equal stuff and one sacrifices everything for a rush victory you will see that victory.  The question is how well does the AI react? And in this case, quite well. 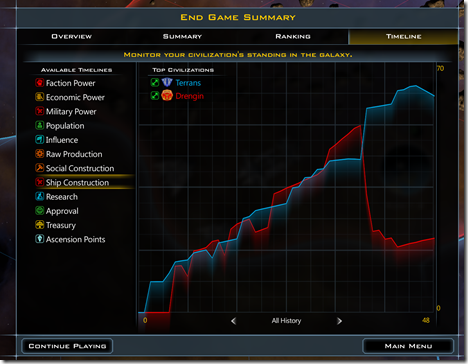 They moved to a war footing quite fast. 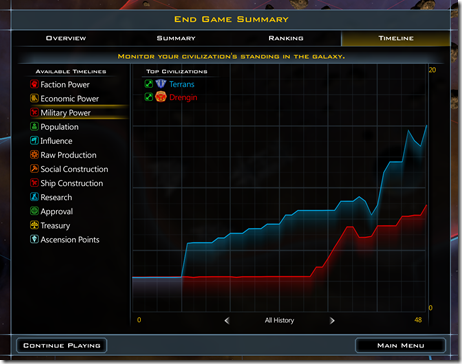 But as you can see, they weren't able to bridge the gap fast enough.

Other than knowing I was going for a rush attack, there's not much they could have done.   If they had met me a little sooner, they might have been able to tell that I was b-lining towards invasion tech (yes, the AI does analyze what you've researched and then categorizes possible strategies you might be using).  But I was careful to stay away from them.