This month marks my one-year anniversary of returning to my beloved Galactic Civilizations as its lead designer.  And since then, we've made a lot of changes much to the joy and angst of many galactic conquerors.

With the announcement of the third expansion pack to Galactic Civilizations III imminent, this serves as a good time to look at where we stand today.

For the past year, I've been going through and weeding out improvements, events and other game modifiers that had unintended consequences.

The very first thing I did was read all the forum posts on GalCiv3.com, Steam, Reddit, elsewhere and see a lot of criticism for what amounts to unintended consequences of multiplying bonuses.  Getting rid of these has been good for the game but not all players appreciate the changes since it dramatically nerfs their gameplay.

For example, with the right combination, you could get ships with a base speed of over 40 moves per turn.  That's without adding an engine.  There are players who have posted complaints at how slow things get when they try to move their 90 move per turn ship around late game on a ludicrous sized galaxy.

The game itself was designed (and thus the underlying engine) on the premise that you wouldn't get many ships with more than say 10 moves per turn.

While the AI could be scripted to do the same thing, it would destroy the game.  If you think it's slow for you to move a ship 90 moves per turn, imagine 60 AI players doing it with 400 ships per turn.  Even with a multicore Astar path finding algorithm, it would make the game both unplayable and not fun (what's the point of even having defenses or a forward line if ships can swoop in from sectors away every turn?).

So there's been a lot of work to get things balanced together.  It's not a matter of trying to change the game around as much as making the game play as had been originally intended.  As a math nerd, when I came in and saw the numbers it was just a matter of time to find all these unintended bonuses and kill them off. 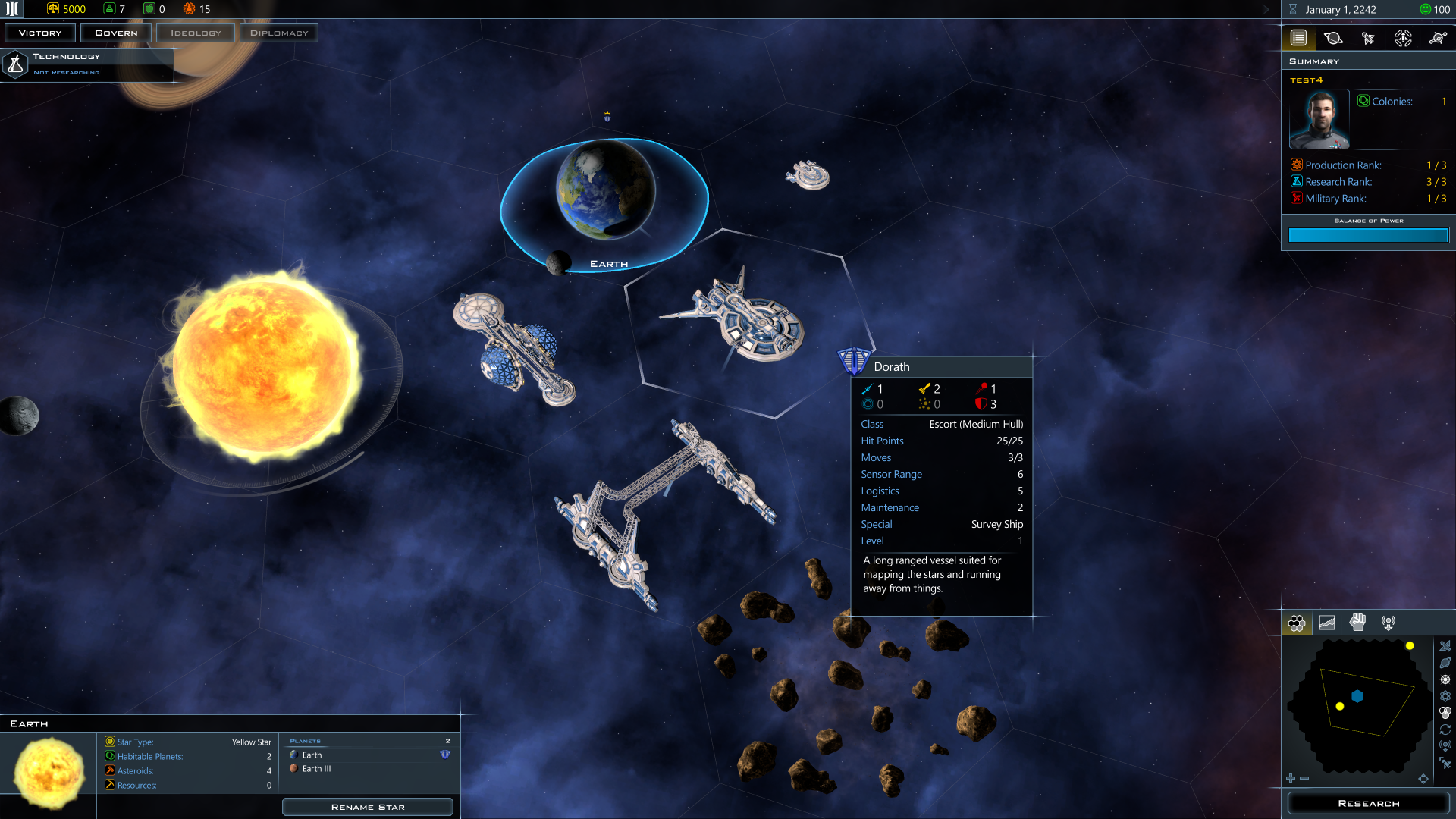 One of our Fall tasks was to do more focus testing on why people don't find GalCiv III that approachable.  From watching new players, one thing was incredibly obvious.  The DESIGNER button at the top of the screen of the main screen was killing us.

Think about it.  You're new to the game and you are just clicking on buttons and you click on the Designer button and you get a super complex screen.  It's poison to new players.

The thing is, we don't really need that button.  For one thing, players can design ships from the main menu now.  Secondly, the ship designer, while super cool, isn't one of the features you need to use to manage your empire.  It belongs as part of the shipyard.

The second big task we worked on for 2.8 was the AI managing legions.  The concept of having to train legions and then put them on transports was relatively new as of 2.5.  And while the GalCiv III AI is somewhat genetic in how it works, I still have to make the "tests" that it has to pass to determine whether it's on the right track.

Unfortunately, I was quickly schooled by other GalCiv players in not being very good at keeping a healthy supply of legions and transports ready to deal with opportunities.  And my own weaker assumptions got passed on to the AI.  Version 2.8 addresses this. Hard.

The rest of the AI changes were small but add up to a big difference.  For instance, previously, the AI had a one-size fits all fleet size.  While good enough for most players, our better players found themselves able to actually out compete the AI even on harder levels.  Thus, the AI gained the ability to evaluate different sized fleets based on a number of galactic conditions (instead of a fixed size).

Most of my work was on Crusade.  We brought over features from Crusade to the base game but we didn't bring what is arguably the more important aspect of it - cleaning and streamlining.

Put  your new player hat on and load up the base game.  You have tons of technologies to choose from with lots of improvements, weapons and modules that really just are hard to grasp onto.  Thus, we streamlined the base game for 2.8 so that there are fewer techs available at the start and what they provide is more obvious and more beneficial. 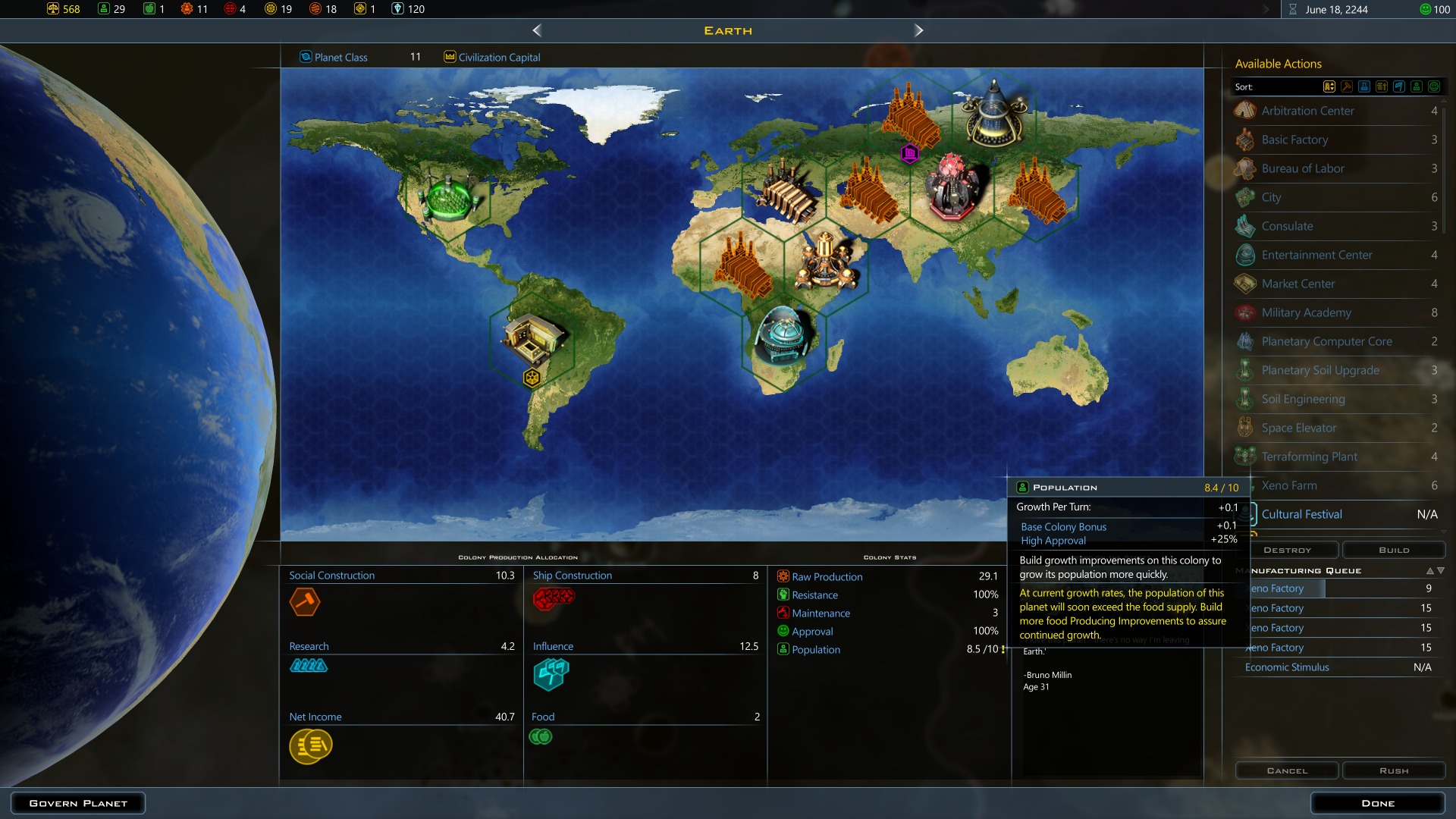 So we have population growth default to 0.1 population growth per turn.  Many good players recognized that if you loaded up transports with tiny populations to colonize you could get huge benefits by fast expanding.  And a big part of our work has been to support tall empires and not give fast expansion too big of a benefit.

For 2.8, we made the minimum population you can have on a colony ship be 1.  This makes colonizing a planet somewhat more serious than previous and allows us to avoid having to do a % population growth (do the math, there's no happy ending with a flat % growth -- boring or broken).

We are in the process of adding some new diplomatic modifiers.  One of which is "We have a long, happy friendship" which essentially helps reward players who have been keeping the peace a long time from suddenly having players going to conquer them.  We already have various hidden mitigating factors for this but we haven't had anything a player could visibly see.

Anything you can do to spread the word on Galactic Civilizations helps.  Sales determine how many engineers we can put on the game.

When GalCiv III first came out, it was at a supreme disadvantage because it was on a brand-new engine.  But now, as we enter 2018, it's multi-core, 64 bit engine is looking pretty awesome as the rapid progress should, I hope, make apparent.  You'll be happy to know that the Spectre and Meltdown fixes you may have heard of will affect GalCiv III very little because we don't rely on single CPU core performance.

Those of you who have moved to 4K probably have noticed just how future-proof GalCiv III is.   As time goes on, the game gets richer, deeper and more polished and with your help, we can ensure it is the ultimate 4X space strategy game.