How will we feed our billions?

In Galactic Civilizations III, we presume that by the time we are colonizing planets, our home world has reached an equilibrium between food production and population.  But let's face it: when we colonize other planets, it'll take many years for those planets to build up sufficient farming infrastructure to produce for the kinds of populations you have on your home world.

Galactic Civilizations III will be treating food a bit differently to reflect the awareness of just how important a large population is on your planets.

When Galactic Civilizations III first shipped, players built farms on planets and that would increase that planet's population.  Because it was so easy to increase your population, our conversion between population to production was: production = the square root of population.

When Galactic Civilizations III v2.0 came out, we changed this so that food became a global resource that was then consumed by cities.  You could build as many farms as you wanted elsewhere, and then build cities on another planet that used that food. Because this made increasing population more challenging (requiring two tiles -- a farming tile and a city tile), the formula was changed to production = population.  This proved better on paper than in practice because on larger maps, players had no problem dedicating entire worlds just to farming, no matter how terrible the planet or how unrealistic that would be. This worked well for building other planets to huge populations, but it created production quantities that were balance breaking.

For v3.0, we have created a much simpler - and we think, more intuitive - system.  Good planets have arable land tiles.  The better the planet, the more of these tiles it will have.  You can choose to build farms on them or you can bulldoze them and build whatever you want.  This reflects the fact that Ceti Alpha V (a class 6 world) is never going to have farms while even a wonderful planet like Earth (class 10) can't have its entire surface farmed (and we do abstract farming to an extent in that your initial colony is self-sufficient in food).

Thus, population = production.  Arable land produces food without you having to do anything at all, but you can also build them up with various levels of farms and use that surplus food elsewhere.  Some worlds will have no arable land.  Others will have several. 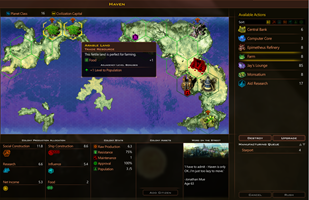 In this example, my home planet starts with 2 arable tiles, which produces 2 food right away.

Now, unlike other resources, unused food doesn't accumulate.  As my wife regularly reminds me, food spoils and I should stop eating it when it does.  But it does mean that with a few good early planets, you can start building cities on planets without having to have built a single farm.  It's proving to be a really interesting mechanic. 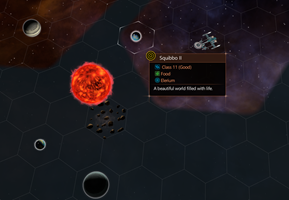 There are two good planets here.  One with 3 food tiles and one with 1 food tile and an elerium deposit.
Which one should I colonize first?

In the above example, getting the Elerium deposit means I can instantly build enhanced lasers, which have military significance.  But if I settle the other planet, I can build a city on my home planet immediately.  This creates some interesting strategic choices that simply did not exist before.

Galactic Civilizations III v3.0 is due for release in April.