Star Control: Origins is a space action/adventure RPG game set in the year 2088.  It's been designed so that your character will continue forward for years to come (you won't have to keep your saved game safe).  So as new adventures and such become available, you can be assured that your decisions and actions of the past mattered in some small way.

So how do we do that?  The answer is, data-mining.

In Star Control: Origins, there are many dialog choices that might seem to to be innocuous, but most of them do increment some variable somewhere for later use.  Don't panic; you don't have to worry about some minor dialog choice resulting in an extra-dimensional alien invasion force arriving later. That's where the data mining comes in.

On its own, if your character finishes the game with, say, a Cagey = 11 value, what does that mean? It means nothing. And for that reason,  we don't show any of this stuff (though no doubt some hacker will figure it all out someday).  What matters is how it compares to the millions of other people who ultimately play the game and where everyone ends up on the distribution curve for the hundreds (literally) of variables that your answers feed.

The closest analogy I can think of is "The Sims" where you see your character gets little +'s and -'s based on what it does. On their own, those choices don't have much effect. It is the accumulation that matters.

This way, five years from now, on your 27th adventure, your character will be well developed in hundreds of different areas and we can use this data to have options that match up to your, by that point unique, character.  There is no "good" or "bad" path here. Rather, we are aiming for a nuanced path. One with many shades of gray that will result in some often subtle but meaningful and enjoyable gameplay consequences.

Below is a screenshot from Adventure Studio.  This is the application Stardock Software (the non-game side of the company) developed to allow writers (instead of techies) to craft dynamic stories. 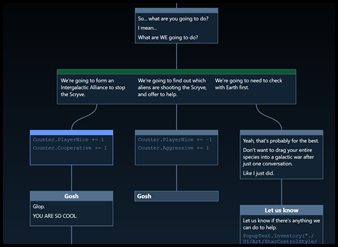 This is a relatively minor conversation with another character in the game.  But as you can see, we implement a couple of variables here based on your answers.  Neither of these choices, on their own, will affect anything at all in the game.  It's just data that the system will be able to use to eventually allow you to have dialog options that match your character's style.

Creating a character based on your responses is not entirely new.  In the classic RPG Ultima IV, the player was given a series of questions in which their responses would determine what their character class was. 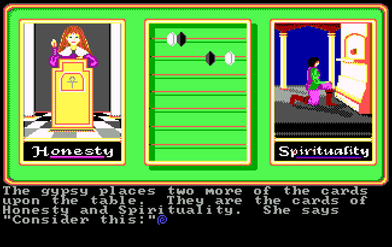 Star Control: Origins starts the player as the captain of Earth's first interstellar ship.  You have a pretty blank canvas to build a character on, but there are certain assumptions that are built in since, after all, you are a Captain in Star Control entrusted with such an important mission.  But as time goes on, your choices gradually result in more and more dialog options which begin to affect the way that not just Origins will play out, but how your future adventures will play out as well.