We're putting the finishing touches on GalCiv III v3.95 which includes both balance changes and new game options and some quality of life updates.

But we've also been working on v4.0 which has a heavy modding emphasis. Now that the major expansions to III are over (we will still be releasing DLCs, but all new FEATURE changes will happen in the base game) we are focusing more on content management, quality of life and helping make sure GalCiv III is the best GalCiv game we've ever done.

So how do we imagine enhanced mod support looking?

Here's what we have in mind:

From the main menu you click on Mods.  This takes you to the Mod Manager. 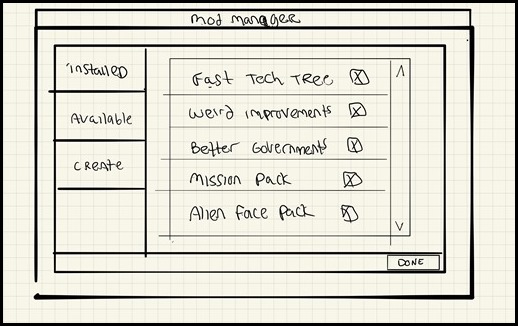 The Installed mods simply let you enable and disable mods.

When you click on Available it takes you to a page that has a bunch of categories of mods.  These are just glorified Steam tags. 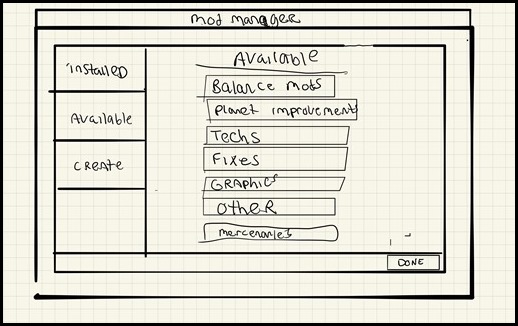 The idea here is that you can press a button and it will launch the Steam workshop browser with tags set up.  Just makes it a bit easier for players to go directly to the types of mods they're looking for.

The last page is Create.

Now, this isn't a tool.  Modders will still have to actually to the mod like they do today.  The difference is adding support for what expansions the mod requires to work and what tags your mod requires. 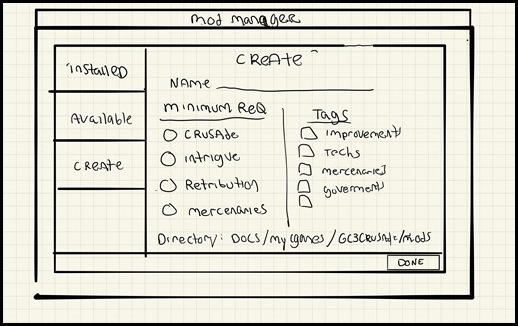 Based on these settings, it'll create a folder in the documents\my games\gc3crusade\mods\ directory with the proper directory structure worked out.

The directory structure in which GalCiv is setup is a bit complicated.  That was because we didn't want to change the gameplay experience for everyone when an expansion came out.  Only those who voluntarily bought the expansion would have the changed game play and those who didn't want that gameplay changed could effectively opt-out.   This decision has a lot of advantages and disadvantages but one disadvantage is that makes modding much more error prone.

For example, for the Retribution expansion we have our various data files in a directory like this:

For those of you who are already experienced at modding GalCiv, let us know what you think along with any improvements to how we are looking to do it that might make it more robust.