This week’s update to the Political Machine adds Ronald Reagan.  He’s the first candidate that includes a scoring handicap which means that your score is modified slightly because he’s a bit easier to win with than other candidates.  We’ll show you here. 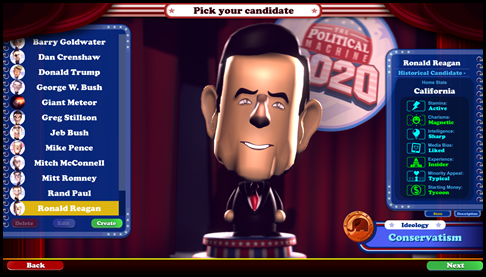 Ronald Reagan was one of the last Presidents we had before the hyper politicization of American life really took hold.  In 1980 and 1984 he won California, something that would not be possible today regardless of whether he had been governor or not. 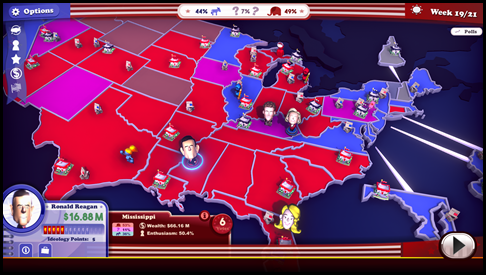 In this simulation, we have Reagan going up against Hillary Clinton.  It’s not very close. 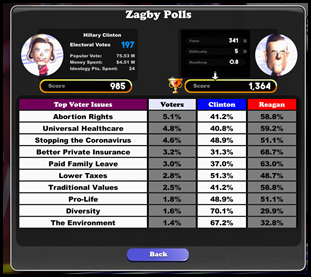 This is where the handicap comes in.  It takes a lot of testing and tweaking here.  For example, we have a _Credibility stat which affects how persuasive someone is on a given issue.  Hence, Reagan, who is pro-life is able to take Abortion Rights and get most people who care one way or the other on the issue to vote for him.  He does less well on Lower Taxes and this has to do with how each campaign spends their time campaigning for (or against) certain issues.

In the example here, it would be safe to say that we need to adjust Reagan’s score handicap further.

So there you go.  Reagan returns!