Ever wanted to have an animated icon on your desktop? DesktopX has a built in UI for doing this.  First, you have to be in the development environment.  Next, create an object. In the "states" page there is an animation tab for each state: 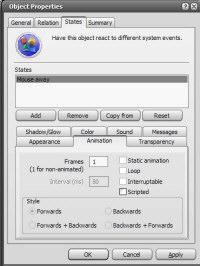 The way animation works in DesktopX is through bit strips.  A bit strip is a single PNG or BMP file that has multiple frames of animation in it. Each "frame" is the same size.

Example of 3 frames of animation.  So let's make one of these for fun.  If you lack any artistic ability, like me, you'll need to find a ready source of existing animations to use. On Google I just searched for "Animated GIF files" since those are pretty abundant. This lead me to this page: http://www.gifs.net/animate/page32.htm. I also found this page. http://www.millan.net/anims/giffar.html

So I found an animated GIF. But DesktopX can't use GIF files for its animations. It uses BMPs or PNGs.  So we need something to convert that animated GIF file into something we can read.  Luckily, there's a program called Bitstrip created by a developer in the skinning community called Redlar.

His page can be found here: http://www.virtualplastic.net/redllar/bitstrip.html

Using that program I turned the animated GIF into a .BMP with 11 frames of animation. So now I go and set the default appearance to be that .BMP file it generated. Then I go to the States tab and tell it that it has 11 frames of animation and check the "loop" checkbox so that it'll repeat. I also change the interval to be 150ms between frames (to slow it down a bit). I also give it a shadow (in the shadow/glow tab) so that it looks a little nicer.  I also go to the "Relation" page and change the Z-order so that it's on the desktop (like an icon) rather than like a window.

And voila, I have an animated guy on my desktop: 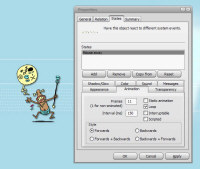 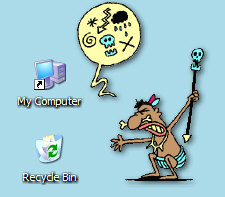 Now, before you get any ideas, it's one thing to take an animated GIF file and use it for your own personal use. It's another thing to take it and start uploading it to WinCustomize or other sites.  Unless it's public domain, freely distributable, or you have permission, you shouldn't re-distribute software or artwork that isn't yours.  Secondly, even if you do, DO NOT upload it as a widget. If it isn't an application of some kind, you should export it as an object pack so that people can add it to their desktop.

You can get DesktopX at www.desktopx.net. DesktopX also comes with Stardock's Object Desktop suite of desktop enhancement utilities.