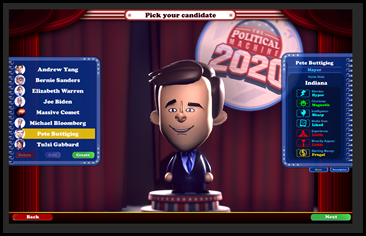 The Political Machine is a strategy/simulation game.  What has made it so popular over the years is that while it is a game, it has a pretty serious and robust simulation running behind it.  Most of the data is collected from a wide array census results, surveys and demographic research.

Every four years when we update the data, we are constantly surprised on the changes we see in different states.  The opioid epidemic is one example.  This issue wasn’t on our radar four years ago. Now it’s actually a pretty big issue in numerous states.

But in other areas, we can't rely on data. We have to make subjective judgments. Take candidate design for instance. Mayor Pete has gone through a few designs this time. Some people are easier to create caricatures than others.  He’s hard. At least that’s what the artists tell me. Mr. Buttigieg is doing well in the early primaries but should he become the nominee, can he win? 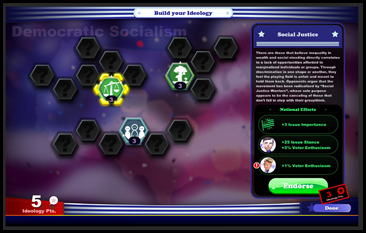 So which states would be harder for Pete Buttigieg to win? 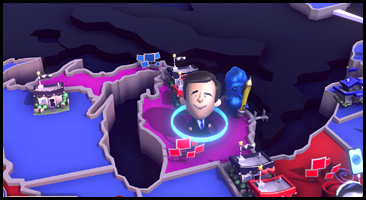 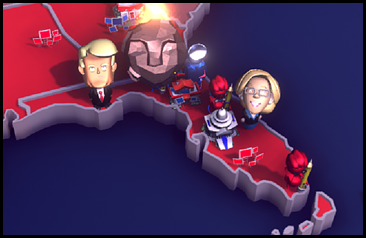 Which isn’t to say he can’t win them.  It's just harder. 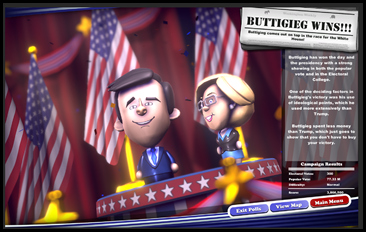 Overall, Mayor Pete is a bit tougher to play as than say Hillary Clinton or Barrack Obama but a skilled player can definitely win.

The "big cleanup" is the plan for v4.0 of GalCiv III.  It's in progress but it's slow going because of developer availability (btw, we are hiring new C++ devs here..).

So as I've discussed in the past, I'd really like to find a way to make modding more robust though that's easier said than done because of the dumb way we did our data structuring early on.

Basically you have lots of directories that the game pulls from which all depends on which expansions you have installed.  It's a pain.

When someone buys GalCiv III today from Steam, they actually get GalCiv III + Crusade + Retribution.  That's because we really want to focus on the assumption that everyone has Retribution going forward (or at least Crusade) which simplifies modding.

I don't have an exact ETA on the v4.0 version other than it'll probably be this Spring.

As I mentioned yesterday, there is a really good use-case for the Surface Pro X as a device that uses Remote Desktop to your "main machine" when doing heavy lifting provided that it is sufficiently powerful enough to do light tasks on its own relative to say a Surface Pro 7. 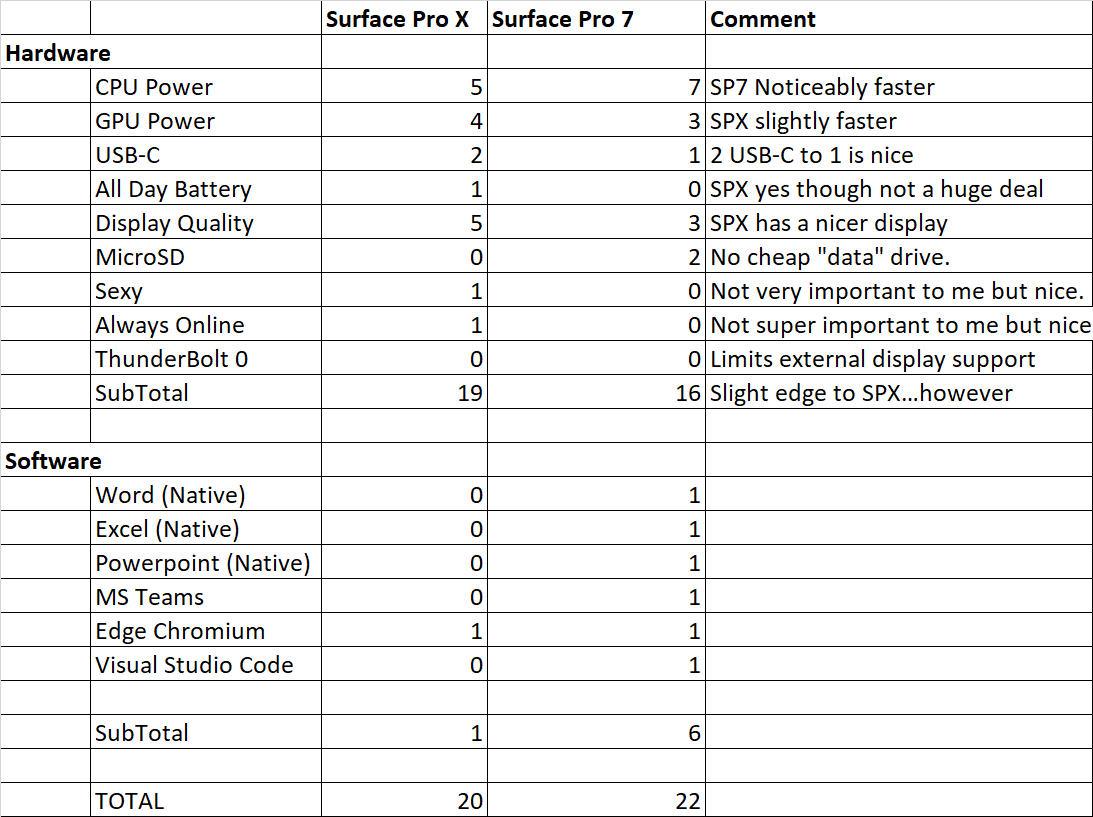 Now, this is for my purposes.  YMMV.

It's on the software support -- from Microsoft -- where things fall apart.  A lot of the benefits of the Surface Pro X hardware disappear when running Windows software under emulation.  This is particularly true on the battery life which just gets destroyed when its doing emulation.

My serious work does include Adobe Creative Cloud (mainly Photoshop, Premiere, After Effects) plus Visual Studio 2019, Unity, Unreal, Cider, Nitrous, and lots of other development work.  But I'm not going to monkey with that sort of thing on an airplane or at a cafe or anywhere remote on any laptop (and if I did, I would use a Razer 15).

I am, frankly, baffled that Microsoft would even release the Surface Pro X without support from its own software.  For instance, MS Teams shouldn't be that hard to port and while it runs adequately in emulation, it's not the performance that is the issue, it's the battery cost of emulation. And this is an app that's running all the time.

So for now, I'll be sticking with my Surface Pro 7 as my mobile device of choice despite the fact that would really like the LTE support and battery life of the SPX. 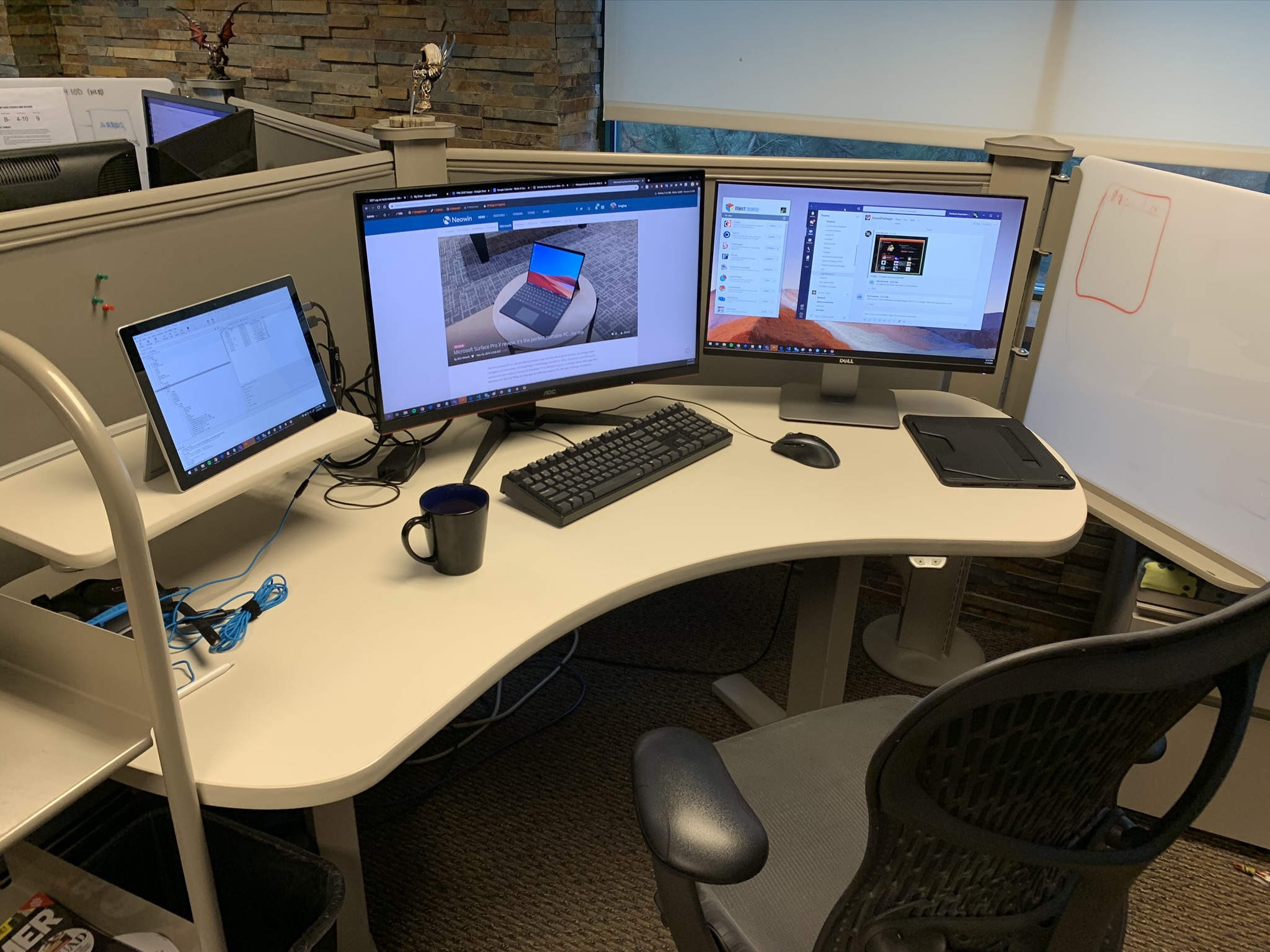 This is my work station area at Stardock when I'm working in the Object Desktop area of the company which is located on the third floor of the building.

As you can see, I have 3 monitors connected to a Surface Pro.  The reason I'm up here is so that I can collaborate in person with the rest of my team.  And the reason for the Surface Pro is that I frequently use it as a tablet for sketching on screenshots and designs.

The only downside is that the Surface Pro 7, while quite powerful, isn't really intended as a full-on development box.  It is more than powerful enough to run Office and tweak things in Adobe Photoshop and I've even edited videos in Premiere with it.  Even After Effects runs pretty decently.  But it's still no where near as fast as my main machine at Stardock which is physically located on the first floor.

At some point, Microsoft's Remote Desktop got really good at handling a multi-monitor setup.  It's had this capability for years but for some reason, I always remembered it as being a pretty crappy experience.  Recently, however, I decided to give it a shot and when combined with our internal fast network and the Surface Pro's high performance along with the crazy fast performance of my main machine I ended up with a solution that runs faster than if I were running the Surface Pro directly.

As a result, when I'm doing serious work at Stardock, I simply connect with Remote Desktop.  I haven't tried doing this from over a VPN yet (so no Coffee Shop test).  But even if it didn't make the cut when running via the Internet, the SP7 is more than capable enough to do all the work I could possibly need when using it cut-off from our network.

Which brings me to the Surface Pro 7.  While some of my friends in the tech community love their Surface Pro X's, I find that there just aren't enough ARM64 native apps yet to justify using it.  To be sure, the Surface Pro X is still more than enough for doing a lot of productivity work -- Jira, Visual Studio Code, MS Teams, Office and such.  But I wouldn't dream of doing any heavy lifting with it.

That's where the Remote Desktop pairing might really let the SPX shine.  First, there is a native Arm64 version of Remote Desktop.  Second, the Surface Pro X is substantially faster in video performance than the Surface Pro 7 which means it may drive my 3 high resolution monitors better (I do wish they had Thunderbolt 3 support however).

As a result, whether I'm at home or work (my home gaming PC is a monster) the SPX would be able to use Remote Desktop to let me get real work done while still being powerful enough to get work done even when not connected to the network (which is why a Chromebook doesn't make the cut).

I won't claim that this use-case isn't a niche use.  But it takes the Surface Pro X from being, for me, completely useless to having a pretty viable use-case.

So I still play quite a bit of StarCraft online.  I am not great at it (low Diamond league) but I am good enough at it to know when I'm playing a Smurf.

A Smurf is someone who is deliberately playing in a league far lower than what they should be in and they really ruin the game experience.

Smurfing isn't specific to StarCraft and there really isn't much that can be done about it that I can think of.  But it is one of those things that helps remind me as to why I don't want to develop games that rely heavily on competitive multiplayer.

If I play 10 games of StarCraft the breakdown is something like this:

1 game will involve some sort of obnoxious cheese strategy (as you go up in rank, this becomes less common ironically).

1 game will involve griefing. This isn't "cheese" per se because they aren't really trying to win as much as make the game unpleasant for you.

1 game will involve a ton of BM that forces me to mute the player.

4 games will be actual, legitimate games.

The only thing that saves StarCraft is that even though only 4 of the 10 games are real games, those games represent the vast majority of actual play time.

But the % of games that involve some sort of social-path spectrum player is sufficient to make me wary of ever wanting to make a game for that genre.

When developing the new Star Control game, we had an opportunity to see how far along the Vulkan and DirectX 12 tech was.  The answer, at the time, was not as far as we would have liked.

In the end, Star Control: Origins shipped using only DirectX 11 because there just wasn't enough of a difference between DX11 and the new APIs even though the game sure could have benefited, especially on the planet, from the features of DX12 and Vulkan.

You might be wondering, what is the big deal about DX12 and Vulkan versus the old DirectX11?

There are a lot of differences but the big one is that DirectX 12 and Vulkan can have multiple threads sending commands to the GPU at the same time.  This means that complex scenes can be composited in various threads asynchronously so that you get the most out of your video card.

Now that most of us have several cores on our CPU, there's no reason to have only a single core talking to your graphics card.

The goal of this benchmark is to help users and our friends at AMD and NVIDIA and Intel to see how well their GPUs are doing with DirectX 12 and Vulkan.  Over time, we hope to see the DX12 and Vulkan scores pull away from the DX11 scores (and we'll be updating the benchmark as new DX12 and Vulkan improvements come in).

If you have any questions, don't hesitate to ask.

With screen resolutions getting higher and higher there are many people who would like to have a bit more control over their mouse cursor.

If you don't already have CursorFX, try it out. www.cursorfx.com.  Stardock is currently working on a major new version of it but it will be compatible with the existing cursors here.

Here are a few of the most popular cursors here on WinCustomize: 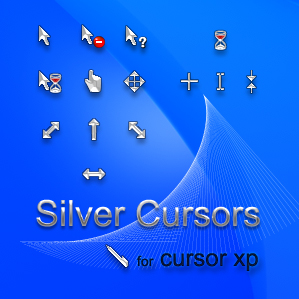 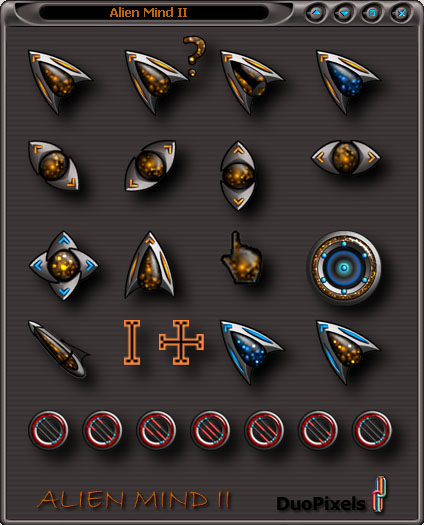 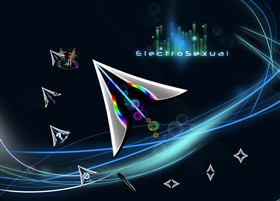 Visit https://www.wincustomize.com/explore/cursorfx to check out the CursorFX gallery. 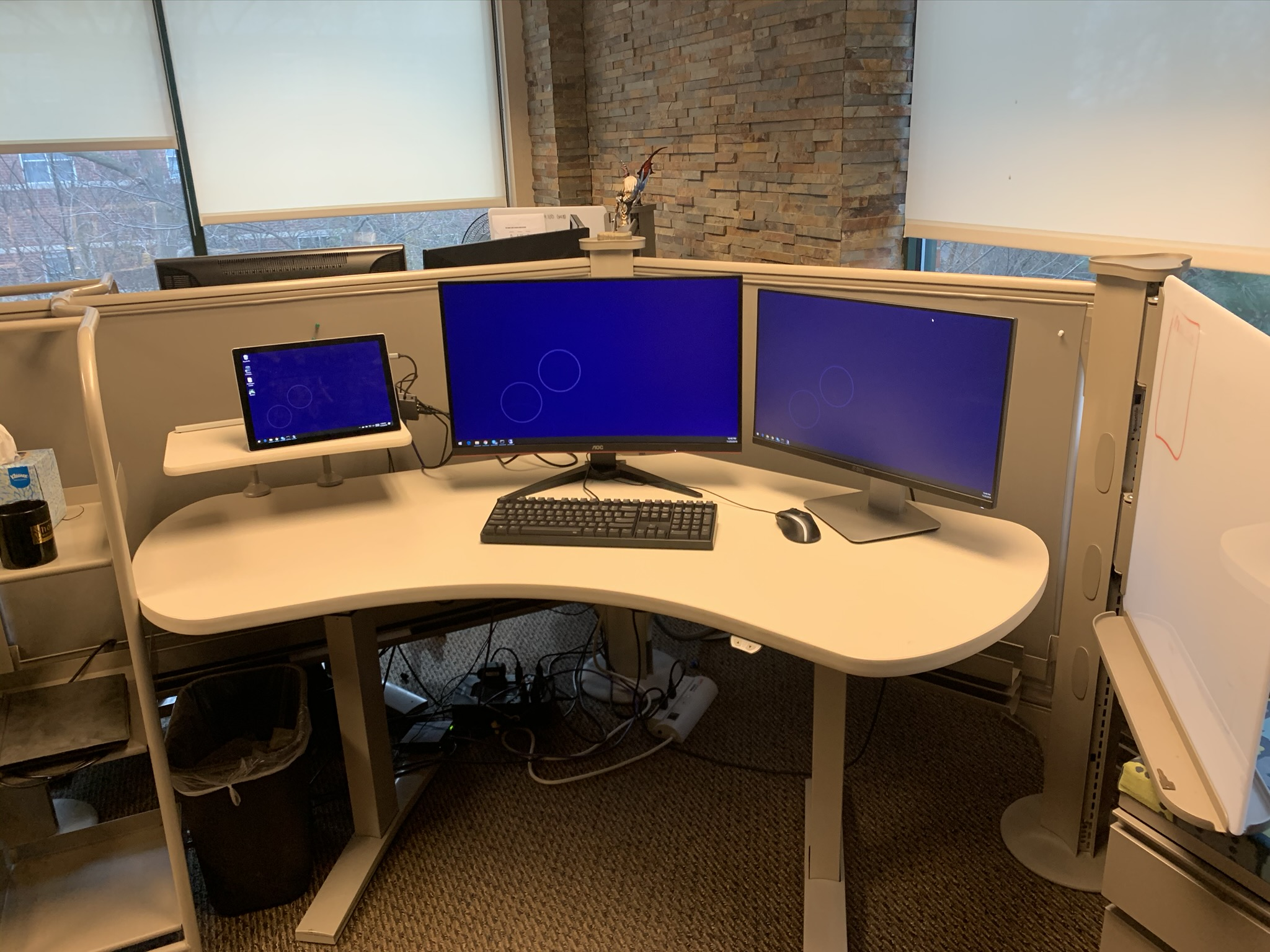 I have everything connected via a single USB-C dock including two more monitors.

My main workstation is in the lower level.

We are looking for some volunteers to help improve WinCustomize's news delivery.

Our mission is to bring you the latest, greatest news on everything related to the Windows user experience.

Back when we were starting, what we now call "UX designers" were called "skinners" (not surprising that as what we do here got more respectable a more refined name would be used).

What are the kind of things we want to cover? Here are 3 examples.

If you're interested in UX design, you will definitely want to keep up with what Microsoft is update to.

Fluent is the name of Microsoft's new design language for Windows.

Here is an example of Fluent design in action. 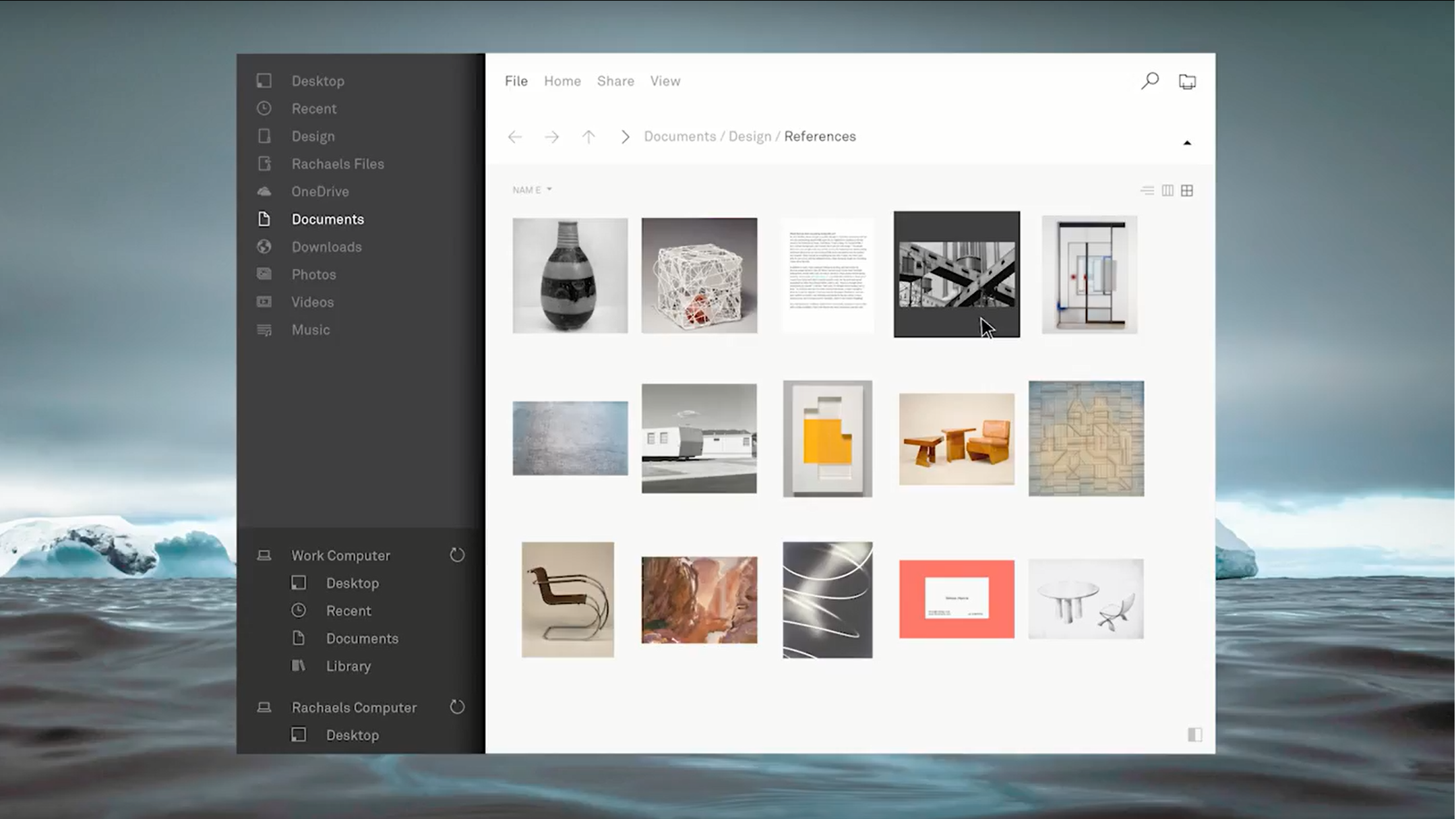 As we get up for a major WinCustomize revamp, we are going to be taking cues from this design language to make the site more accessible, faster (much faster) and more modern.  Stay tuned.